Late Monday I got home from a two week excursion that was quite fun, if far too long and thoroughly exhausting.  Work got done, my bride sister got showered, and FogCon got attended.  The last bit is all I’m going to blog about.

A bit of background: The very first time I ever flew anywhere, it was from BWI to Oakland (stopping over in Salt Lake) to visit a quasi pen pal who lived in San Rafael.  The trip was made of awesome, and enlightening on many fronts.  I already knew I was a city girl trapped in the country.  This confirmed it.  It also introduced me to Chinese food, chopsticks, gnocchi, and cheese-filled hot dogs.  My favorite souvenir from the trip was a sterling silver ring that looked like a snake coiling around my finger which I got from a street vendor.  It was not one of the pieces spared in the great apartment burglary of 2007, so I’ve been looking for an adequate replacement ever since.

I flew out from Norfolk on Wednesday.  This required me to get up early, and took all day.  Literally.  It was 1am Thursday by the time I checked in.  I’d done so much running around with event buzz while prepping for the bridal shower, and then work before that, I was zombie-Anaea.  Also, my body was very confused about what time zone we were in – I think it had us pegged as somewhere in the middle of the Atlantic to explain the hours I was keeping.

I woke up much too early Thursday, sighed, and started working.  Wrapped that up as quickly as I could, promised myself to go to bed at a reasonable time so I wouldn’t star the con tired, then set off for adventure with a two-fold mission: Bubble Tea and Borderlands.

I took the BART as near to Chinatown as it appeared to go and then set off walking.  I kept my eyes peeled for jewelry weilding street vendors in hopes of finding replacement jewelry, and meandered in the vague direction google maps indicated for finding Chinatown.  I wound up stalking a street car going up California which claimed it had a stop in Chinatown.  This was clever, especially since switching coasts always leaves me a bit disoriented for a while.  (Not my fault.  The water is on the wrong side!  Even Chicago knows that big bodies of water belong east of you.)  I did a lot of poking into shops while wandering through, looking for bubble tea.  I did not do a very good job of taking pictures.  Coherency, I was beyond it.

It is entirely possible that Chinatown in SF is chock full of bubble tea joints.  I found lots of tea shops, most of them advertising free tastings, but none of them advertised bubbles or tapioca.  After about two hours of wandering I was trying to figure out whether bubble tea is somehow not authentically kitschy enough for SF’s Chinatown, or perhaps it skipped the west coast before landing in the Midwest?  Of course, I’d also spent two hours looking for bubble tea, and I was getting stubborn about it.  (Not, you’ll note, stubborn enough to ask the magical internets living in my pocket.  That’s cheating.) 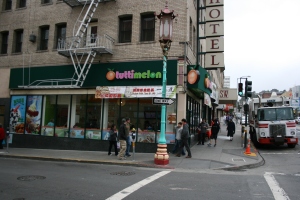 I’m pretty sure it’s a chain, and it’s barely in Chinatown – there’s a taqueria across the street – but they served bubble tea.  I got a lychee black tea with tapioca to go and felt very pleased with myself.  Mission 2/3rds accomplished!

According to my google maps research before setting out, it’s about 3.5 miles from Chinatown to Borderlands and there are no less than four good public transit routes for getting from one to the other.  Other research indicated that there are sketchy neighborhoods between the two best dodged by the wary traveler.  I so totally took my bubble tea and walked it.

Look, I spent nearly all of Wednesday on a plane, and if I sat still I was going to fall asleep.  Caffeine does nothing for keeping me awake, but I was at the so-tired-caffeine-cures-this-headache stage.  Also, my sense of self-preservation is under-developed.

I survived.  Maybe I accidentally missed the scary, scary bad bits.  Look what I did find!

I think there was a museum of some sort behind it.  I didn’t explore too much, just stopped long enough to snap pictures because, dude, random dandelion sculpture.  You don’t find things like that if you take the train/bus/streetcar.

Does that one look hungry to anybody else?  It looks hungry to me…

Borderlands is, in fact, awesome.  I didn’t have any room in my luggage for book purchases, what with cramming two weeks of stuff into my carryons.  So, of course, I had a meltdown and wanted everything.  I settled for picking up Neruomancer and Vortex, the first because I haven’t read it yet and should, the second becasue OMGloveSpinandAxisdidn’thurtme.  Then I sat down in the cafe with more tea (my poor head) and had some bonding time with the internet via my phone, then with the book I’d brought along.  I pried myself up when it was time for dinner and asked the guy working behind the bookstore counter for a dinner recommendation for somewhere nearby.  “I have no idea.  I live in Oakland,” he said.  Oh well.  I wandered over to mission, then more or less randomly picked a restaurant with a sunbursty type symbol rather than an actual name on its sign.  I should have taken a picture of the menu because I have no idea what it was called, and can’t identify it past saying that it was on the east side of Mission, south of 14th street, and blue.  The guacamole welcomed me to the west coat by blowing the roof off my mouth.  It was awesome.

Then I dragged my tired self back to Oakland, via BART, finished drafting a story, and assured myself that just as soon as I know all my roommates for the con had made it safely and checked in, I would go to bed and die for many, many hours.  We all converged around 12:30.

Yeah, I was up until 3.  I blame Elizier Yudkowsky.

By the way, helpful lesson learned I pass on to you: Make sure the people sharing your room know that your pen name, by which they know you, is not the name attached to the credit card holding the room.  This will make everybody’s life easier.