Yesterday I tried to take the day off.  I’m notoriously bad at actually taking days off, so in order to thwart my productive instincts, I had somebody spend the day hanging out with me.  The theory was that my hosting instincts would smother my “I should get things done!” instincts.  This was a nice theory, and led to walking into the grocery store to get supplies for dinner with nothing more specific than, “Tasty” and “Not meat,” to go on.  So that trip was all about the produce section.  I went a little nuts. 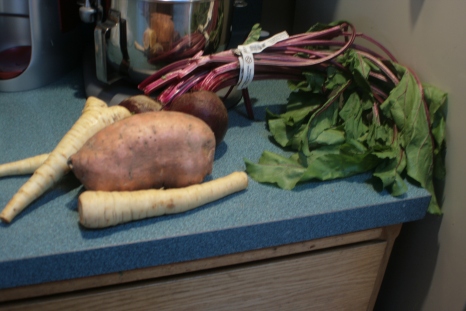 That’s a bunch of beets, a sweet potato and three parsnips.  I basically picked up everything that sounded tasty.  Then I stared at it in my shopping cart, feeling a little uneasy.  “I have no idea whether there’s a complete protein here.  It’s not dinner without a complete protein.”  I don’t do very much vegetarian cooking, so this isn’t usually something I have to think about.  The part where I had no plan for what I was going to do with these things didn’t help me feel more secure in my plans, either.  So I did the reasonable thing: I panicked.

Panic, in this instance, expressed itself by adding an eggplant to the mix.  I know eggplant has everything you need for dinner to be a meal.

It also crystalized my plans for what I was going to do.  I wasn’t sure whether it was going to work, but I had a PLAN.

One doesn’t simply slap eggplant into a skillet and sautee it, however.  I’m new to eggplant, I cooked my first one last summer, but every recipe I checked my first time was very explicit: Thou Shalt Drain Thine Eggplant. 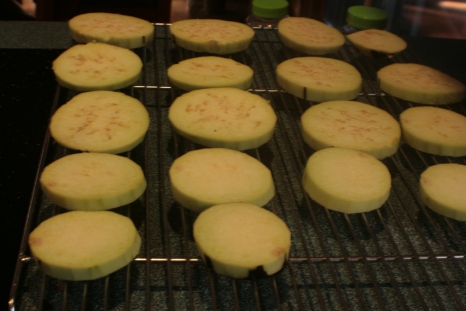 You only have to do it once to understand why this is considered a must.  And it’s pretty easy, just requires you to do a little prep ahead of time.  Peel the eggplant, slice it up, then salt it and leave it sit.  Through the magic of osmosis, the salt will force the excess water out of the eggplant so you don’t wind up with a soggy, watery mess.  The results, after an hour or so, are pretty persuasive.

I’m not sure it comes across in this picture, but there are beads of water just sitting there on top of the eggplant.

Dinner time approached.  I put my house guest in charge of setting up a game of Agricola while I started chopping up the root vegetables, and pre-heated the oven to 500º. 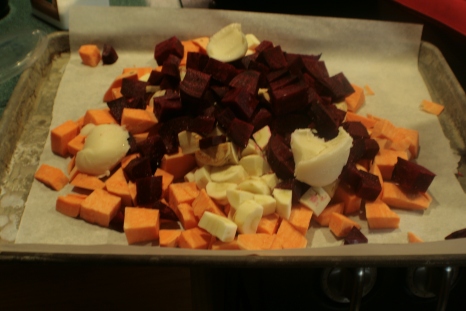 The lumps of white stuff are bacon fat.  Because bacon fat totally isn’t meat, and also it’s tasty, and that’s the only seasoning I used on the root vegetables.  Which I piled onto the tray. 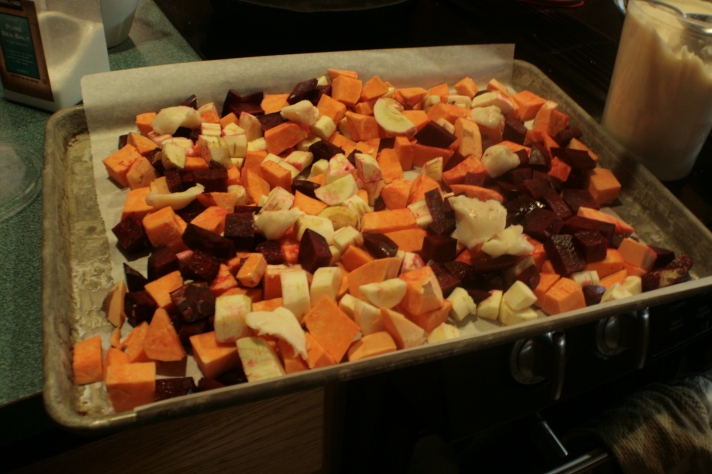 Then spread out, and broke up the chunks of fat so they would cover the vegetables more thoroughly.  I came back to stir a couple times during the cooking process, just to make sure they stayed nice and coated.

The beautiful thing about cooking while playing Agricola is that you can take the action the person you’re playing with wanted, then go chop things while they reconsider their life and their decision to engage in faux medieval farming.  This is a chopped onion and the greens from the beets. 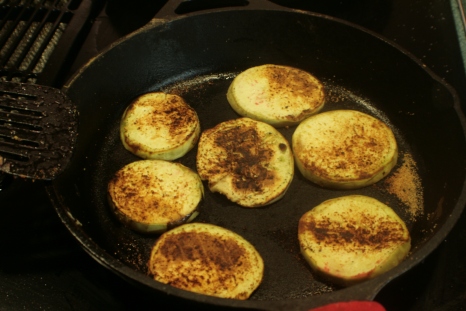 Sauteeing the eggplant was easy.  I made sure the skillet was well oiled with, you guessed it, more bacon fat.  Then I sprinkled powdered garlic on the eggplant and slapped into the skillet until it looked nicely browned and tasty.  I had the skillet on medium heat, moving from the high end to the low end of medium as the cooking progressed.  As I finished a batch of eggplant, I tossed it onto a plate which I kept in the microwave, on the theory that it would stay warm better there.

After finishing up the eggplant, I put just  dab more bacon fat into the skillet and sautteed the onions.  When they were looking tasty, I tossed in the beat greens, then sautteed until they were looking wilty and good.  Wilty, by the way, is a technical term meaning this: 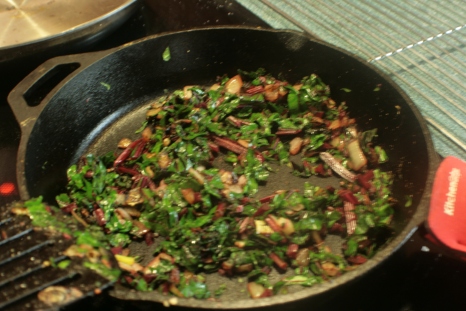 By this time the root vegetabels were nicely done and I’d turned the heat off the oven.  Then I tossed the plate with the eggplant into the oven to hang out and stay warm until I’d finished establishing my superiority at faux medieval farming.  (Forty-eight point game, y’all, even with a begging card)

I threw some feta cheese and a splash of vinegar onto the beat green salad.  Then I crossed my fingers and hope that the meal was both tasty, and coherent.  And it was!  The beets didn’t mesh with the sweet potato and parsnips quite as well as I might have hoped, but I think I got away with it.

As for my day off…well…I worked less than I would have if I hadn’t taken it off.