February’s recipe theme was breakfast breads and pastries.  I only got three of the recipes in but February was insanely busy, and also short, so I refuse to feel guilt about this.  Also, my freezer is overflowing with frozen things waiting to be baked, so I don’t think anybody was deprived by the shortage.

The first recipe for February was brioche.  I opted to do the single loaf option rather than the traditional knot styles.  Certain roommates had expressed a request that the bread production be more “bread shaped,” and with the potato bread loaves I got tasty grilled cheese sandwhiches made for me.  I’m perfectly willing to enable other people making me dinner.

This started with a sponge again.  My mixer bravely did not shudder when it saw me prepping another sponge, and this sponge did not develop sentience, begin to breathe, or otherwise disconcert me.  It was so well behaved that I actually pulled out the ingredients for the rest of the recipe ahead of time.

I’d like to take this moment to wax enthusiastic about my favorite revelation from this whole endeavor – measuring by weight.  It is so much easier to slap a bowl on a scale and then pour an ingredient into the bowl until I hit the right weight than it is to find a measuring implement, fill it up, level it, dump it, wonder if I’ve got all the remnants out, or enough of them, making all sorts of extra dishes and…you get the idea.  Measuring by weight has the added benefit of being more accurate, what with things like flour compressing willy nilly, but I’m more taken with the sheer convenience of it.  I’m going to be looking for weight-based ingredient lists in recipes going forward. 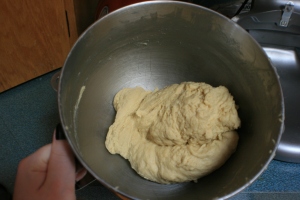 Anything after the potato bread was bound to seem simple, but this brioche was flat out friendly.  Maybe it was all of the butter. 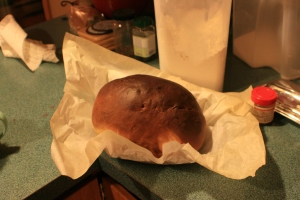 This bread was fabulously tasty.  And yes, it got turned into really good grilled cheese.

For the next recipe I decided to touch base with a recipe I do have experience with, and made blueberry muffins.  The recipe claimed they were “Ginger Blueberry Muffins.”  On the whole, this recipe was a bit of a disappointment.

I’m not saying they weren’t good.  They were.  Especially the second batch, which I took out of the oven ten minutes before the recipe claimed I should.  What I am saying is that I don’t think The Professional Pastry Chef had anything to teach me about blueberry muffins.

2 thoughts on “Brioche and Muffins”