It’s Halloween.  You have two hours before people come over.  Trick-or-treaters are knocking on the door.  Clearly this is the opportune time to construct an elaborate dessert!  Especially when you got completely soaked biking home from Jade Mountain and didn’t have time to get all the ingredients from the grocery store.  Sometimes I suspect I’m not nearly as competent as I claim.

Strawberries Romanov is basically just the fanciest strawberries and cream you’ll ever get.  You make a chocolate goblet, then fill it with a custard, strawberries you’ve macerated with sugar and booze, and then top with whipped cream.  Custard’s easy, and I took care of it in the morning before going anywhere.

The original recipe had a yield of 16 servings, and required 16 eggs for the custard.  I only needed three servings, and had three eggs in the fridge.  So I decided to make a 1/5 recipe. 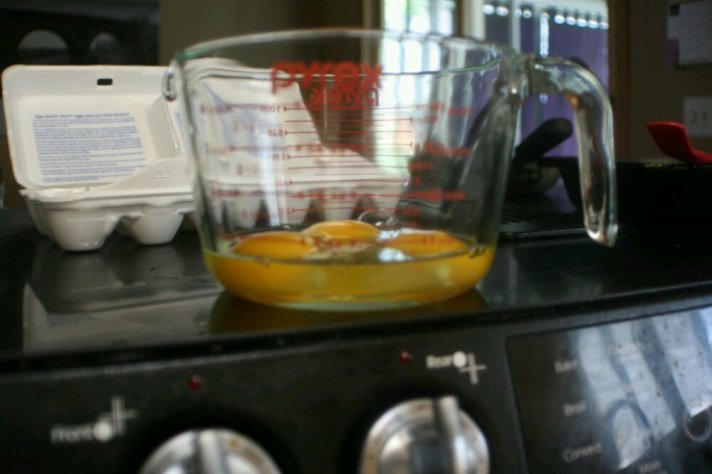 The best part of shrinking the recipe down was that I could do it all in a glass measuring cup, which made the logistics much, much easier than they would have been otherwise.

Beat the eggs, add cream and sugar and zest, just making a custard ma’am, move along.

Here comes the part where I got clever.  Rather than fill ramekins that weren’t quite the right size or shape with the custard for baking, I decided to use a cupcake pan that wasn’t quite the right size or shape.  That meant I could use a cookie sheet for the water bath and that this was generally a lot simpler than custards frequently are.  Also, pour spout on the measuring cup!

Next up was making the chocolate goblets.  This is the first doing froofy candy-style things with chocolate I’ve ever done.  Going in, there were a few things I knew, even before the cookbook told me:

1) You must use tempered chocolate

Remember what I said about being short on time and not having time to go to the grocery store?  Yeah, all I had were chocolate chips.  But, since I knew they wouldn’t temper properly, I decided to skip that step.  It’s not like processes like this become standard practice because they accomplish anything, right?

Here’s something cool: You make the goblets by covering balloons in chocolate, letting it set up, then deflating the balloons.

My first clue that maybe this wasn’t going to work came quickly: the chocolate didn’t really coat the balloons when I dipped them.  This led to finger painting with chocolate, certain the whole time that I was going to have to run downstairs to distribute candy at any moment.  Nevertheless, the finger painting was fun.

The balloons were the wrong size and shape, so these were destine to be more bowl than goblet, but I was ok with that.  Then I stuck them in the fridge to set up, and swapped texts with the impending house guest to make sure we’d have strawberries and cream for the rest of the dessert.

When you read about tempering chocolate, most explanations say it does things like “gives the chocolate a pleasant bite,” and “pleasing gloss.”  What they mean is that it makes the chocolate firm enough to support itself when shaped.  Unlike my chocolate-chip goblets. 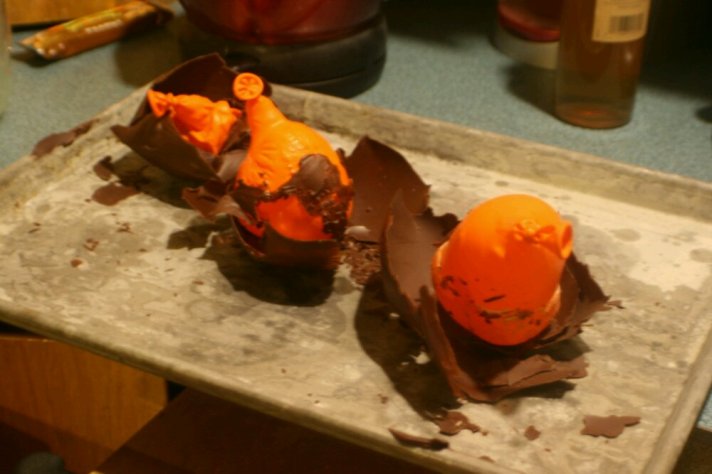 Did I let that stop me?  Er, no.  If you looked at them really hard, you could tell they they might once have been something that looked a bit like a bowl.  That was good enough for me.

I soaked the strawberries in simple syrup spiked with blueberry vodka.  I spiked the whipped cream with the blueberry vodka, too.  And then it was time for assembly.

The cupcake pan did not lead to pretty custards, but since their purpose is to hide in the bottom of a bowl and get smothered by strawberries, I wasn’t all that worried about them being pretty.  Then again, since the bowl wasn’t really a bowl, they were more visible than intended.

This was not nearly as pretentiously pretty as intended in the final reckoning, but it was quite tasty.  I’d definitely take a crack at it again, if only to try getting the goblets right. 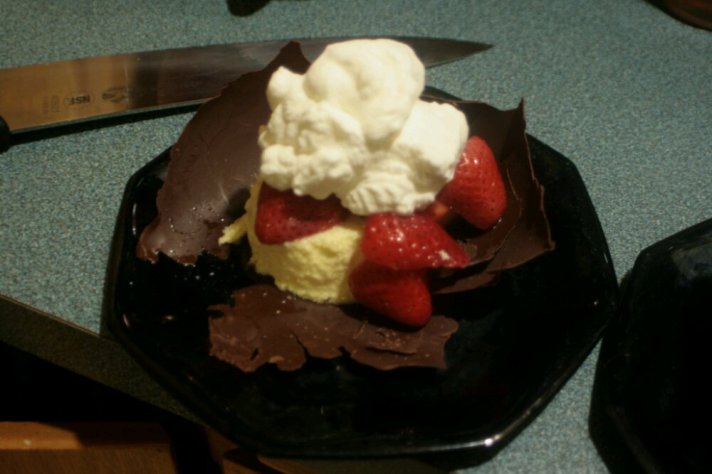