Argentina: All the Buenos Aires

This is going to be a catch-all post for time in Buenos Aires.  I could break it up in the various legs with the bits where we left in their chronological spots, but that requires many more blog posts, it’s already the year after we went, and it’s not like pictures from my phone are mega gorgeous anyway.  So. 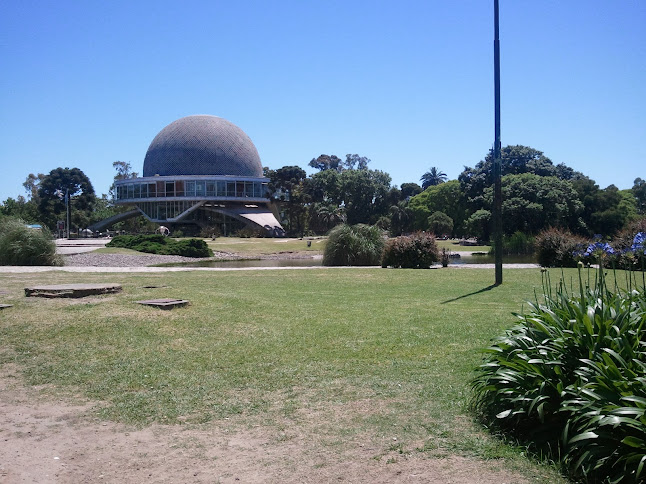 That’s a picture of the planetarium.  I recommend walking around the planetarium because the grounds are quite lovely.  Don’t plan to actually go in and get anything out of it unless you speak Spanish, though.  It’s mostly just an Omnimax, and the movies are re-dubbed into Spanish.  Fortunately, I thought to ask about that before we bought tickets, so John wasn’t stuck in a giant cosmic movie he couldn’t understand.  That did, however, cramp our plans for the day a bit, so we wandered over toward the botanical gardens. 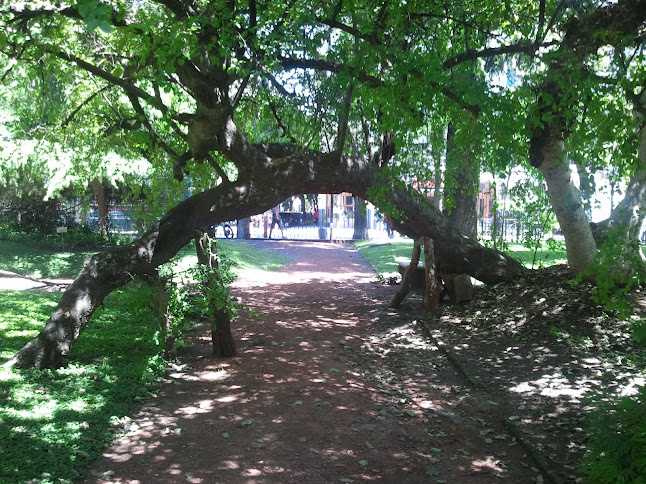 I wasn’t expecting much from these after the planetarium was a bust and the Japanese gardens had an entry fee.  This was wrong of me.  The grounds are deceptively large, as in, I expected it to be tiny but it just kept going on.  It’s also full of cats who are hanging out, lounging around, and generally reassure you that yes, somebody is keeping the gob-tobs of pretty birdies in the trees from becoming decadent. 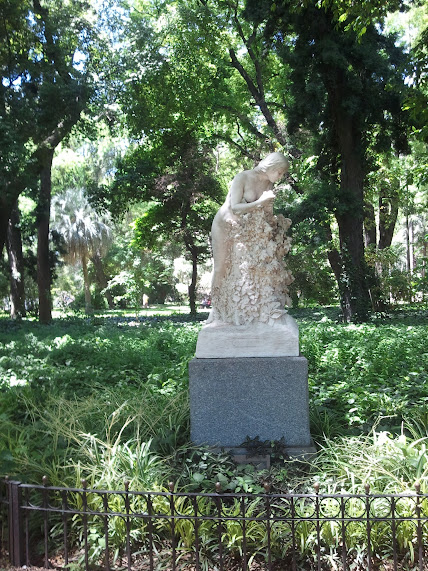 The botanical gardens are also right next to the zoo, which we didn’t bother to go to because John wasn’t thrilled about looking at animals we can look at when home in Madison.  Point.  However, since there are food cart vendors hanging out outside the zoo, we did partake of some food cart lunch.  This was when I tried out the superplancha, a loaded hotdog.  Living in Chicago rehabilitated the hot dog for me a while ago, and the Icelandic hotdogs were quite nice while being idiosyncratic enough to keep me from feeling lame for going to a foreign country and ordering a hotdog.

Don’t order Argentine hotdogs.  They feature everything bad about American hotdogs, with a distressingly pasty quality to boot.  Absolutely anything else from a cart vendor is going to be better – absolutely everything else we ordered from a cart was really good. 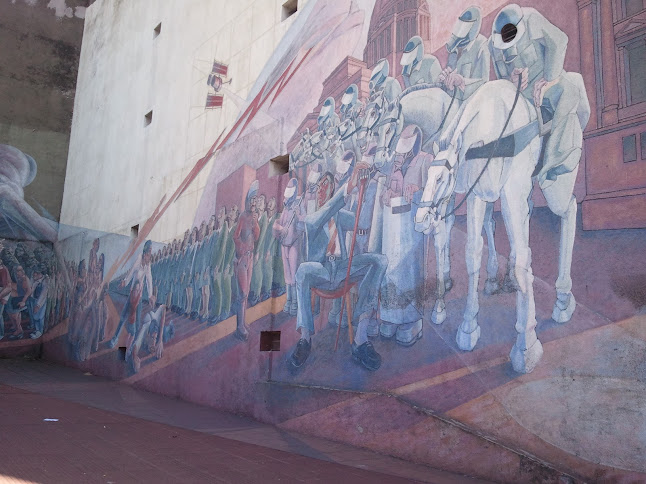 After a week away in Bariloche, Peuma Hue, and El Calafate, we made it back to Buenos Aires just in time for the weekend fairs and markets.  This prompted an excursion out to Palermo, where they’ve got two rather large markets that happen on the weekend.  I enjoyed them greatly; there were lots and lots of things I’d have happily bought if I felt like schlepping half the crafts from the country home with me.  I picked up a pair of earrings and stopped there. 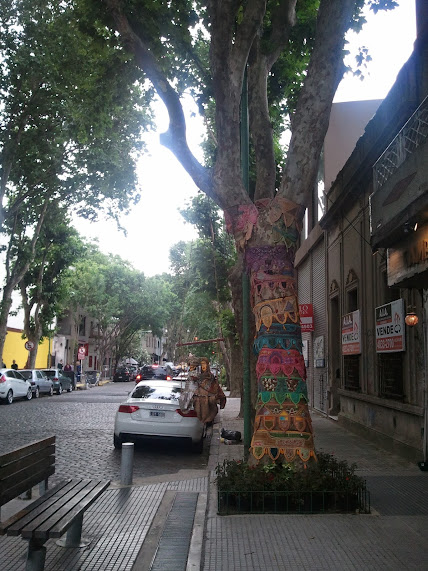 You may recall from the first Argentina post that I hadn’t been terribly thrilled with the restaurant selections I found recommended in the guidebook or online.  Talking to other people while we were away confirmed my suspicions that we were getting the, “Safe for nervous gringos” reviews as opposed to the “actually has really good food” reviews.  So I implement a new policy.  It came in two parts.  The first was that we were going to stop having dinner the very second restaurants opened (around 8pm).  The second was that our restaurant selections were going to be made by walking down the street and picking ones full of locals. John was skeptical about the efficacy of this policy.  I decided to test it by re-tackling Argentine sushi. 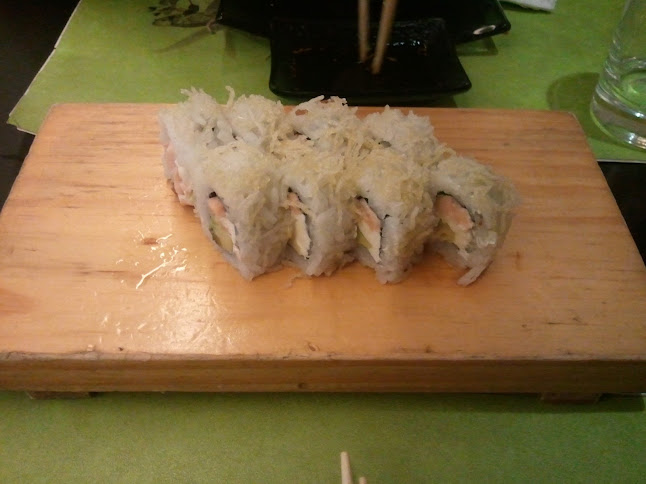 I think John is still of the opinion that my policies were insanity, and thinks we just started getting incredibly lucky all of a sudden.  Because, wow.  The food was really, really good.

Argentine cream cheese tends milder and airier than whats common in the States.  And they put it in all of their sushi rolls, rather indiscriminately.  This was a problem for John until he realized the texture of the local cream cheese (“Philadelphia” on the menus) might be different enough that it wouldn’t trigger his intense hatred of cream cheese in sushi.  And with one exception across two dinners, Argentine cream cheese worked great for him.  I think the trend to use Peruvian and Carribbean flavor profiles in designing the rolls – making them much fruitier and sweeter than standard US rolls – helped a lot, too. 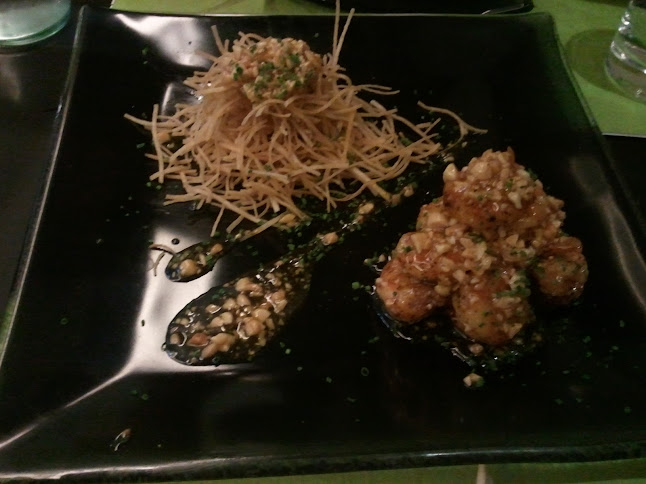 This was probably the best presentation of shrimp I’ve ever had.  It was a Peruvian sweet and sour passion fruit glaze with cashew crumbled on it, and it was mind-blowingly good.  We wound up ordering it when, because they were out of green onion, the first three appetizers we tried to order weren’t available.  The waitress recommended it and she was right to do so. 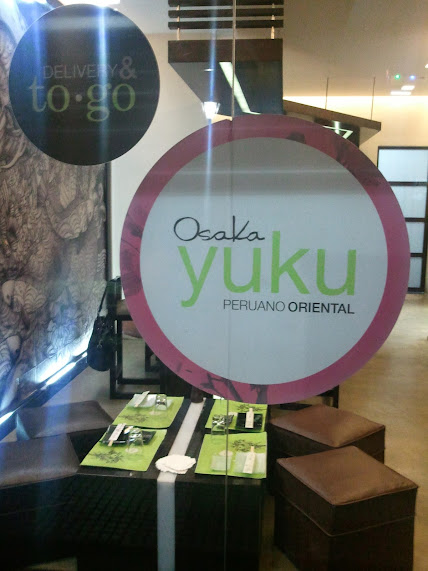 If ever you are in Buenos Aires for dinner, EAT HERE. 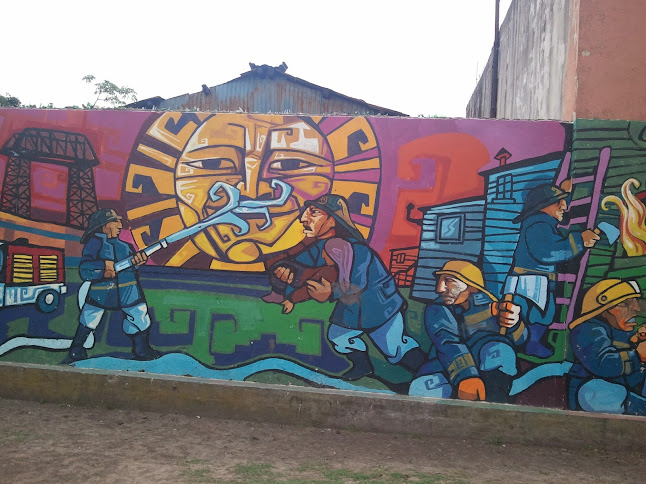 Other excursions involved a chunk of a day spent in La Boca.  Even with strolling over there from San Telmo it wasn’t a full day, but the market had the best quality crafts we found anywhere.  It’s extremely tourist-y, though.  Aggressively, tackily touristy.  Worth going, but I wound up really put off by the kitsch.  Part of it was having to think in order to read the really offensive tourist T-shirts.  I compulsively read text when it’s in front of me all the time, but when I have to think about it, and then it’s something I didn’t actually want to read, it’s extra annoying.  Go for the street stalls and because the neighborhood is cute.  Stay out of the shops. 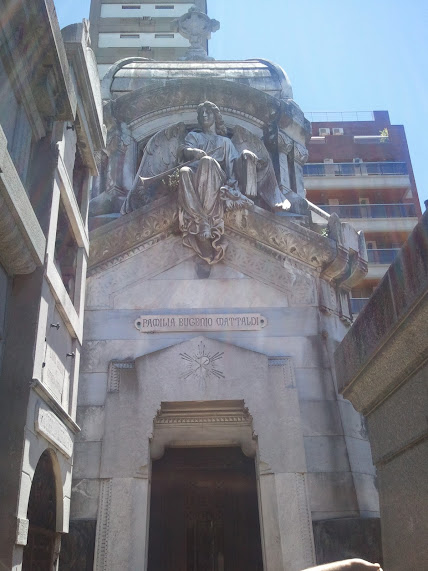 The Recoleta Cemetery, known for being both very old, and very big, was totally worth the walk.  Be prepared for shadeless sun exposure, though.  And it’s near enough to a clutch of neat museums and whatnot that you can make a pleasant day out of hanging out in the area. 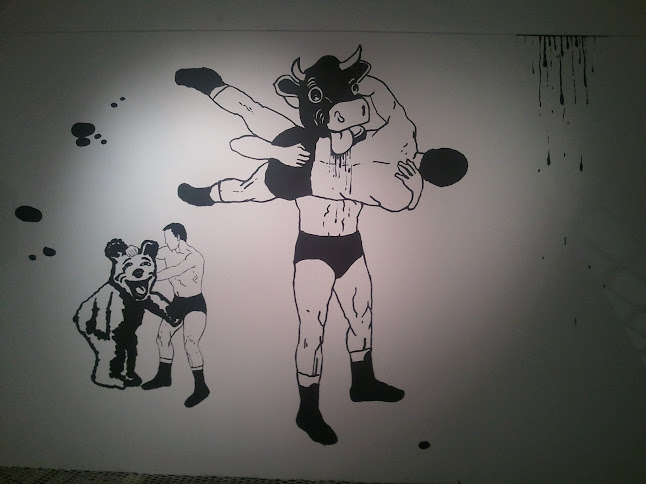 Uhm.  Yeah. We wandered into a building that looked very MUSEUM because we were headed to the Fine Arts museum and it was kinda near the right place and I was hot and hadn’t looked at the map recently.  It was an art museum.  Contemporary art.  This whole wall was kinda special.  But hey, I learned a lot about wrestling and local culture surrounding it.  I suspect, since he couldn’t read the placards, John just got disturbed.

The Fine Arts Museum, by the way, is fantastic.  It’s free, the collection is impressive, and with the exception of one room which feels like a hodge-podge grab-all, very well curated.  We had to wait in line to get in since they were controlling the number of occupants at any given time, but the line moved pretty quickly.  I didn’t take any photos – too busy gawking. 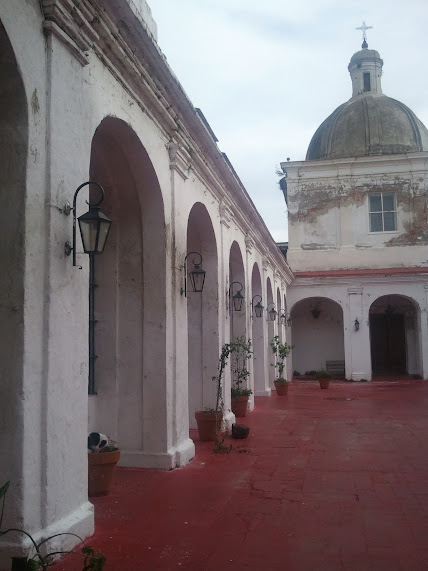 This is the courtyard of the women’s prison museum in San Telmo.  It was right near all the nice antique shops and whatnot, and totally worth the cost of entry (Free).  Neat building, cool artifacts (the shiv collection was particularly impressive), and there’s a very pretty church right next door that’s also worth checking out.

The other really fantastic food we had in Buenos Aires comes with no photos – the lighting in the restaurant was bad and I was too busy having spasms of tasty.  There’s a Middle Eastern restaurant in San Telmo we’d passed a couple times, and since John and I both like Middle Eastern food and Madison lacks a really good source of it, we decided to check it out. 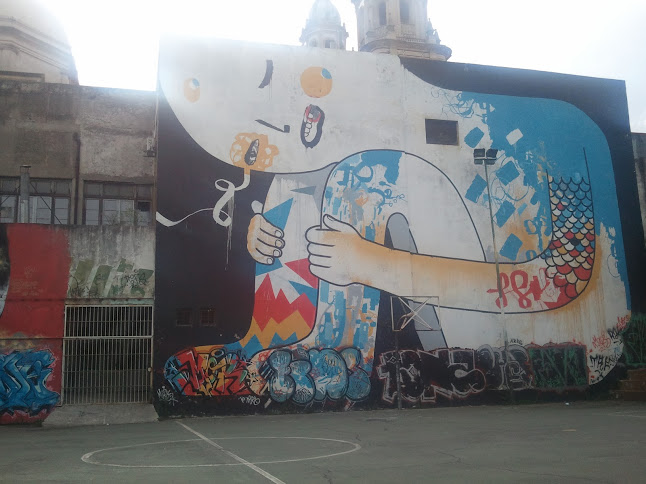 I ordered the shawarma.  It was the. best. shawarma. EVER.  The flatbread was a little too prone to fall apart, but the meat was perfectly cooked, fantastically seasoned, and the tzatziki sauce was phenomenal.  I couldn’t finish it all, and was heart-broken about it.  John tells me that when the waiter came to clear our plates, I glared him down.  I think that’s an exaggeration.  I did clutch my plate a little hyper-possessively and make it very clear that I wanted my leftovers to go, please.  The other food was really good, too, but I’m going to have dreams about that shawarma for years.

It was so good, we went back for our last meal before catching our plane home. 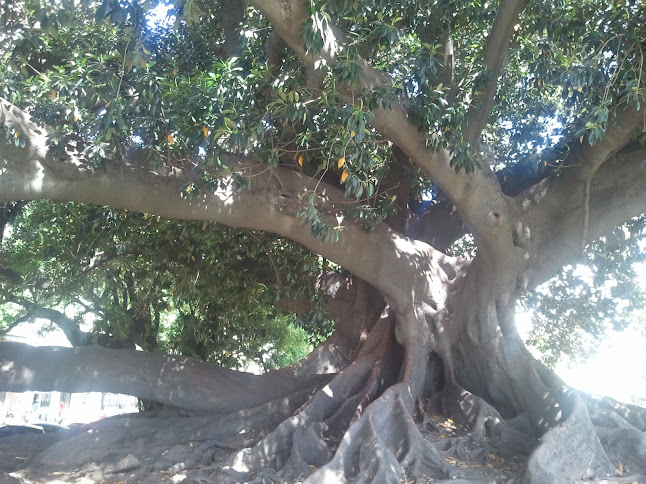 Getting around we mostly took the subway.  This worked out great for our last leg because the subway workers were forming a new union (apparently the existing union had many more bus workers and they’d negotiated a contract that screwed the subway people) and striking.  This led to a bit of confusion, but mostly free subway rides since there was nobody there to sell tickets.  Neat! 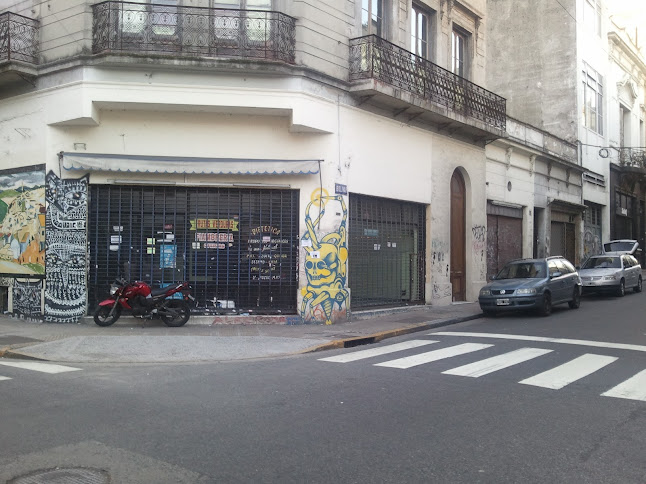 We did a bit more riding the bus, though.  Our first leg we’d borrowed a transit card from one of the B&B staff.  Riding without the card turned into a bit more of an adventure than was really warranted.  A “I just dropped two coins on the floor and the bus is dark and I can’t find them and now we don’t have enough for fare, also what’s going on?” sort of adventure.  The bus driver excoriated me at length for being incompetent and wasting his time and being a highly ignorant, self-absorbed tourist who just traipsed onto the bus without bother to figure out how it was supposed to work.  I think he assumed I couldn’t speak Spanish, because I cannot fathom yelling at me the way he did if he thought I’d actually understand. 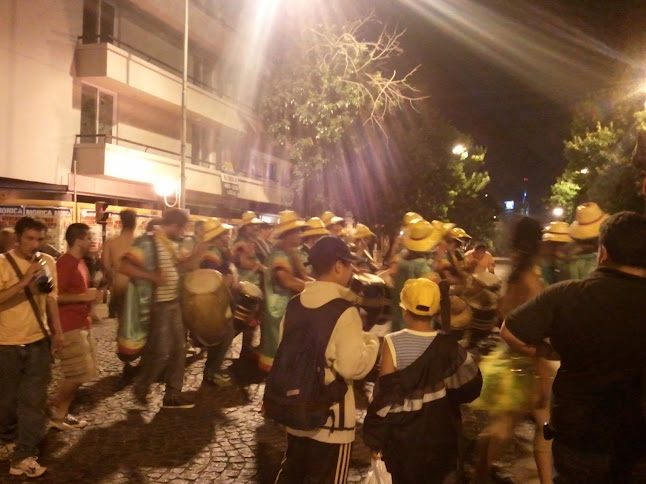 In the end, John did not really like Buenos Aires at all.  I didn’t expect him to.  I liked it pretty well, but I’m not in a rush to go back and (thankfully) don’t feel any particular tugs toward moving there.  I had a really great time, and it’s absolutely worth visiting, but if you don’t speak Spanish, do your research very, very carefully.  Buenos Aires is a challenge, and adding a language barrier can only make it harder.  It’s worth the challenge, especially if you like big cities, but it is not for a novice traveler going it alone.