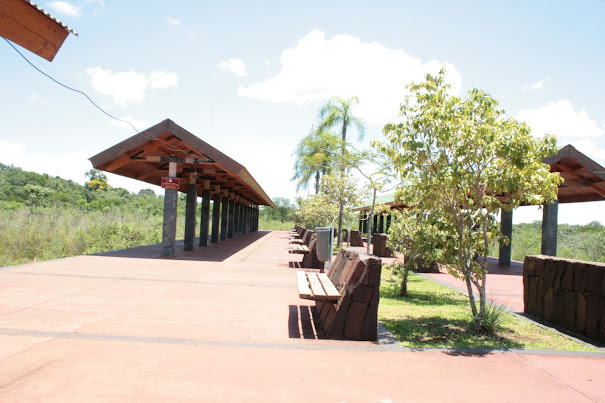 We’d gone west.  We’d gone south.  It was time.  We went north.  To the rainforest.  To the land where, one wrong step across the border and you’re at risk of yellow fever. Within a literal stone’s of Brazil and Paraguay.  Ladies and gentlemen, we’d arrived in the sub-tropics. 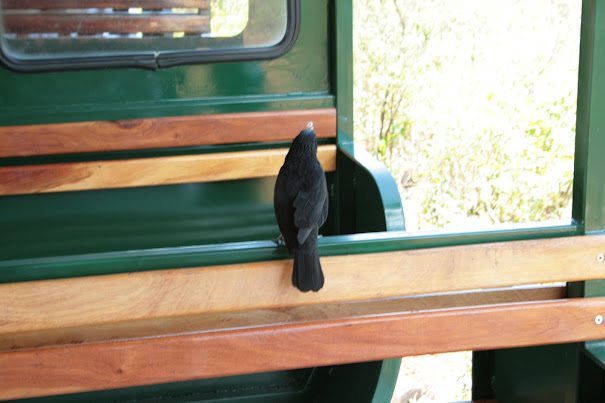 I’d put us in a hotel that was almost directly across the street from the bus station.  We arrived in the late afternoon after luxuriating in the classiest of the classy Argentine buses.  Never have I been so comfortable and pampered while traveling.  We got off the bus, collected our bags, and looked across the street.

“It’s right across the street.  A narrow street.”

“Can we get on the bus and go back to Buenos Aires?  I don’t care about the waterfall anymore.”

You don’t have to take my word for it about how miserably, disgustingly hot it was.  Take, instead, the fact that John actually considered my proposal before rejecting it. 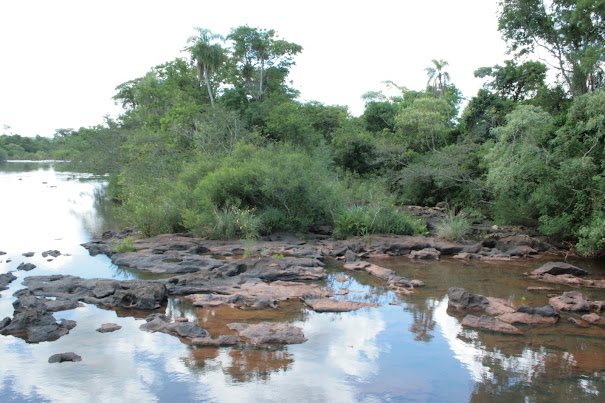 We wound up taking a walk through Puerto Iguazu because John needed a voltage converter and I didn’t have the heart to send him looking for one with nothing but a map and charades skills.  Then again, I don’t have a heart at all, so I’m not entirely sure why I didn’t just cower next to the air conditioner in our hotel room.  I was probably too hot to think through that part clearly. 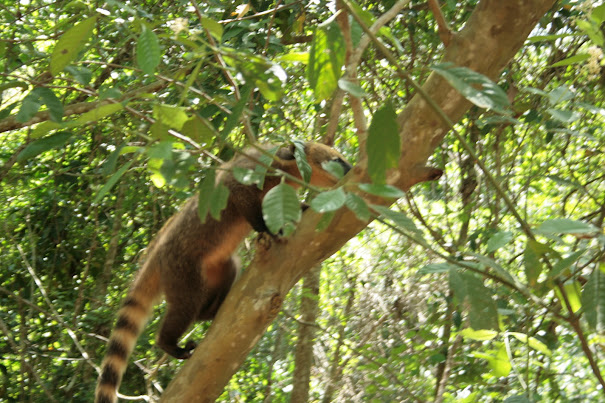 I bring this up not because the way my brain turns to jelly when the weather becomes uncivilized is fascinating, but to assure you that I know what I’m talking about when I say that Puerto Iguazu is utterly skipable.  If you go to Iguazu, which is probably a good idea in July, there’s no reason to stay in town. Go for one night. Stay at the Sheraton in the park.  I didn’t go inside the Sheraton, but unless it’s infested with mold and roaches, or is otherwise unexpectedly gross, getting to be in the park is way more interesting than anything town is going to offer.  And I do not lightly recommend opting for the wilderness over population density. 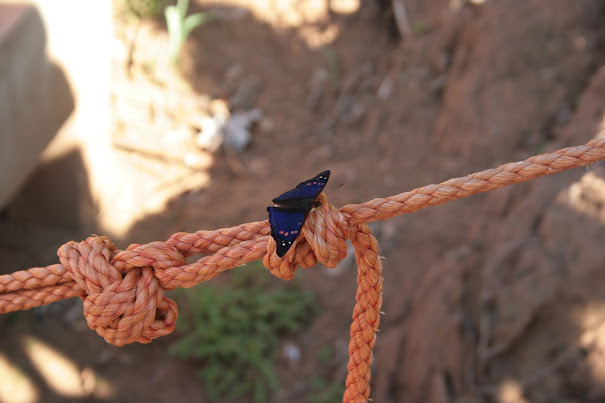 Now, if you’re wondering why on earth I, pale, sun-phobic, summer-loathing creature that I am, decided to go that near the equator that close to the start of summer, it’s this: Iguazu has really big waterfalls. 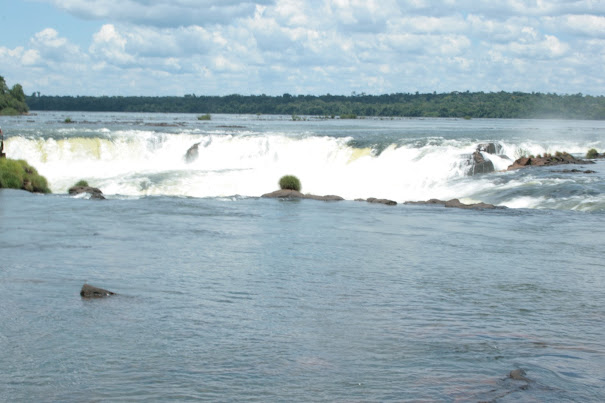 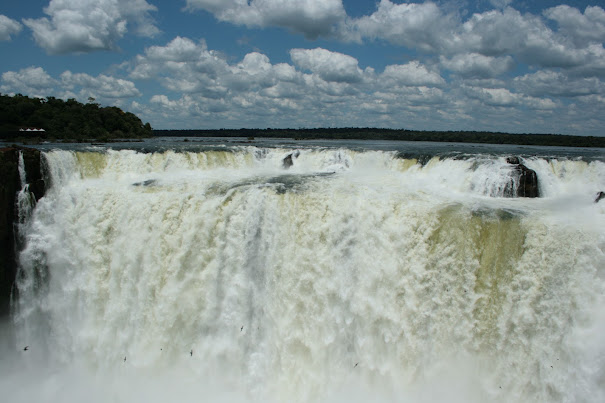 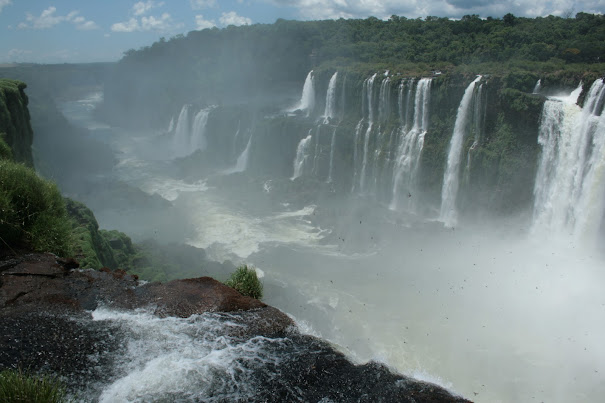 Its, uhm, rather impressive. 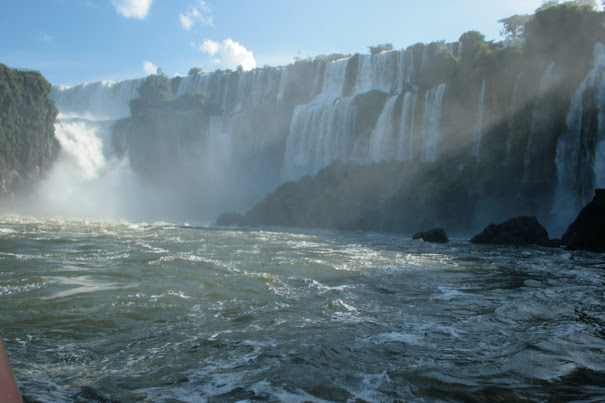 “John?” I said when we got to the end of the boardwalk path that takes you from the park’s train station up to the top of the waterfall.

“Is it wrong that I look at that and keep thinking about how fun it would be to take a kayak over the edge?”

“Oh god, I miss the glacier.  It was nice and cold there.” 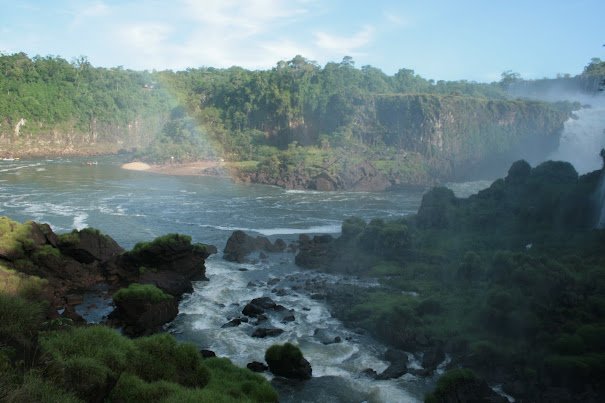 My original vision of the trip had us going to Iguazu early on, when it would be earlier in the spring and hopefully cooler.  But then I read about the moonlight tours they offer, and I checked the calendar, and, well, end of the trip it was. 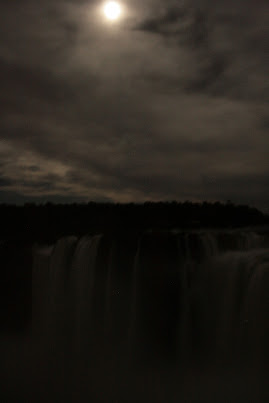 I am most proud of the photos I got during the moonlight tour.  There wasn’t just the challenge of getting a good photo of something moving fast under low light conditions – there was the added bonus challenge of doing it through the splitting headache I wound up with because everybody else kept using their $#!@ing flash.  Dear Everybody: Your built-in flash is not going to illuminate THAT WATERFALL.  It will give the people in the group with extremely good night vision a rather horrific headache.  I’d have killed you all, but I couldn’t really see anymore by that point. 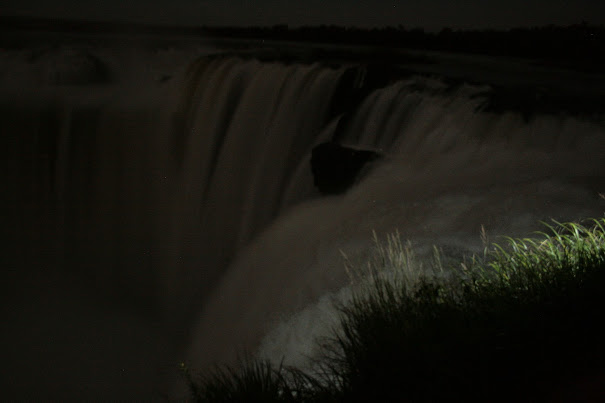 It was worth the trip up to Iguazu, even with the inhumane weather and the obnoxious everybody else.  We did the boat tour that gave us an intimate look at the falls.  By intimate I mean it went under the falls.  Several times.  In two different places.  It was kinda the most awesome thing ever. 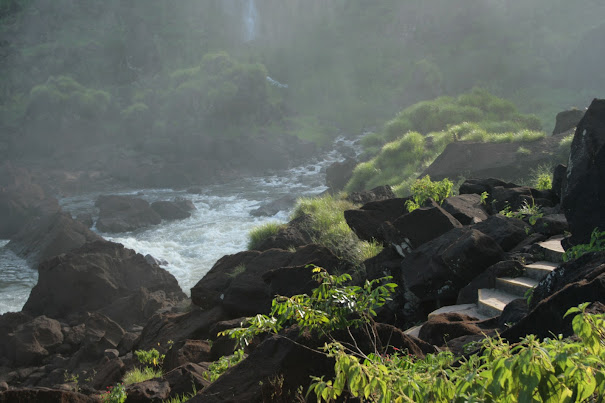 When we got back to our hotel after the moonlight tour it was rather late and we were both exhausted.  Check out was at 10am, but our bus wasn’t until much later in the day.  So I decided to try getting us late check out.  “Tengo una pregunta,” I said to the desk clerk on our way in.  Then I explained what we were hoping for, and got told that we had to be out of our room on time, but if we wanted to rent another room and change over to that one, we could get late check out from there.  We were too tired for changing rooms to sound appealing, so we rejected this offer.  Then the clerk asked me a question. “Er, come again?” I asked, except in Spanish honed by three weeks among native speakers.

The clerk asked the same question.  It made exactly the same amount of sense.

“What time is your flight?” the clerk asked.  John handled the rest of the communication from there. 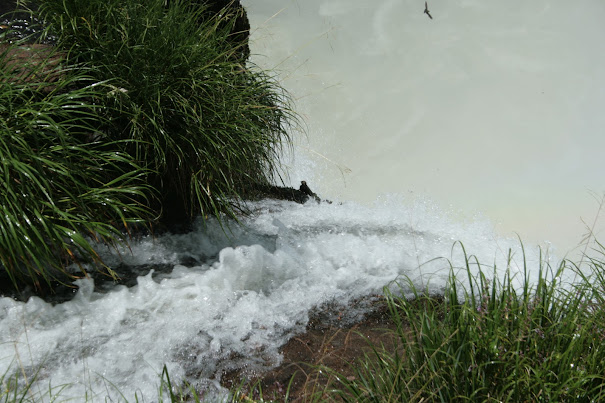 “You were doing really well, then all of a sudden fell apart,” John said when we got into the elevator.

“Vuela and abuela are hard when you’re exhausted,” I moaned in reply.

“I kept hearing him ask me, ‘What time is your grandmother?’ Which didn’t make sense because they’re both all the way in Virginia.”

“Shut up. I’m taking a cold shower and going to bed.” 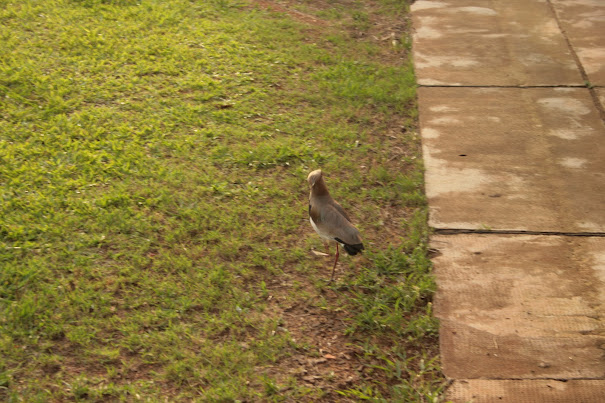 And this, my pretties, concludes my ramblings about the Argentina trip.  It was a really good trip. I recommend Argentina as a place to go, especially if you’re up for travelling around once you get there. 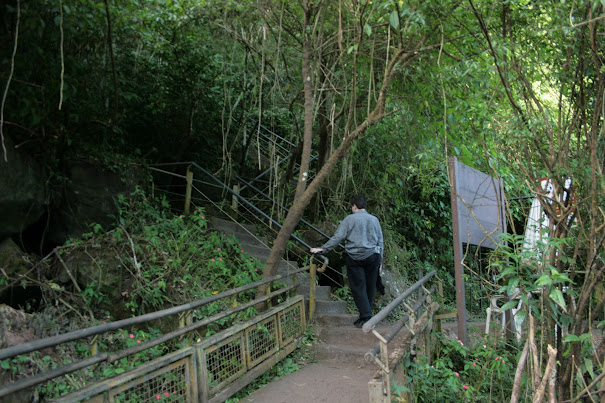 Album with more of Iguazu here.