I swear I am not purposefully engaging in acts of vegetarian cooking.  It just keeps happening, possibly because I have absolutely no idea what I’m doing and for some reason that makes it seem like a good idea.

Anywho, I got home from a fabulous trip wherein I visited my sister and her hubby, plus the rest of my family, and also the fabulous Noah (and met his nifty girlfriend) and took a longing look at my kitchen.  “I missed you,” I said you my kitchen.  “I can’t imagine why.  It’s not like you’d cooked anything for two weeks before you left,” it said back.  My kitchen, it is a jealous, harsh creature.

“I’m cooking dinner tomorrow!” I said, without so much as looking at my calendar.  I picked up a new cookbook in D.C. and was thinking of maybe wasting time I didn’t have pouring through it to pick out something cool and turning the whole cooking dinner thing into an extravagant waste of a Tuesday evening.  “We have artichokes and fennel in the fridge that need to get used,” the roommates reply.  Nevermind.  New plan.  Let’s cook not one, but two vegetables I know nothing about. 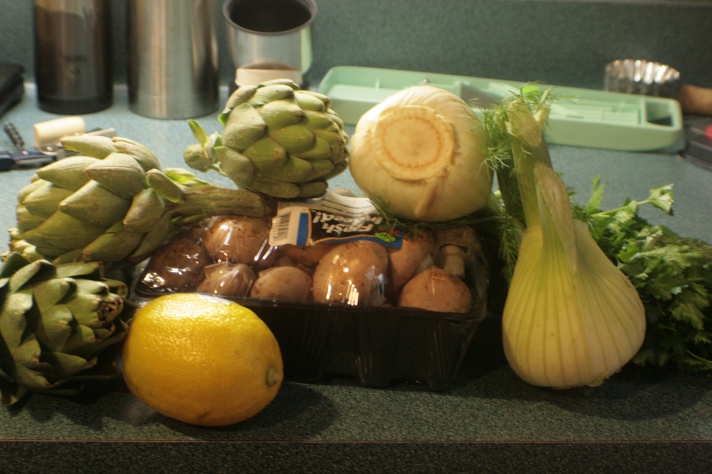 Doesn’t that just look like the start of something that is going to be awesome?  I poked around the internet a bit to get an idea of just what one does with artichokes and fennel, then decided that this recipe looked tasty.  Then, because I am a brilliant creature full of good ideas, I decided to sorta ignore the recipe a bit and throw in mushrooms for some protein-y goodness and also because they’re awesome.  Mushrooms make most things better. 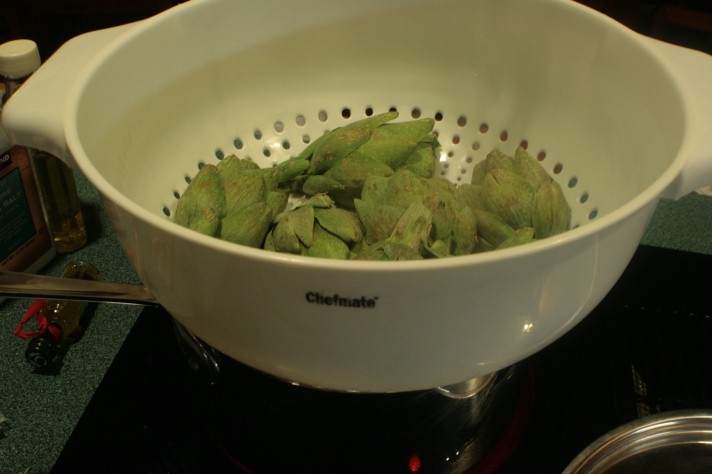 I don’t think we own a steaming basket.  I’ve never really steamed anything before.  I got a bit creative and stuck the artichokes in a colander over a pot of boiling water and hope a lot that the plastic wouldn’t melt.  Also, that this jury-rigged system would work at all.

Chopping the fennel was easy.  This was the point, though, where I realized we were out of onion.  Oh well.  Mushrooms are like onion.  Sorta. In a “not at all and I can’t believe I just said that,” sort of way.  Let’s keep moving, shall we? 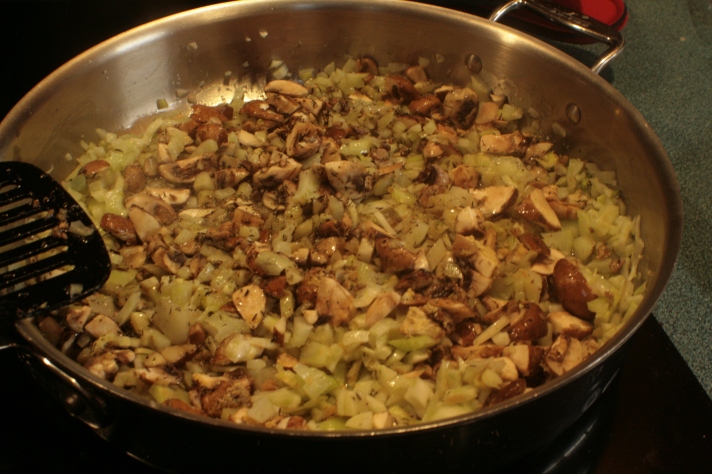 This was the part where I was tempted to just get a wooden spoon and start eating dinner out of the skillet.  It’s possible I have a weakness for mushrooms in skillets full of oil.  DO NOT JUDGE ME.  Also, this was taking much longer than I’d expected it to, what with lots of stopping to stare at the artichokes and fennel and go, “I think this thing I am doing resembles what the recipe says I should be doing.  What could possibly go wrong?  It’s not like whole parts of the artichoke are functionally inedible…wait…” 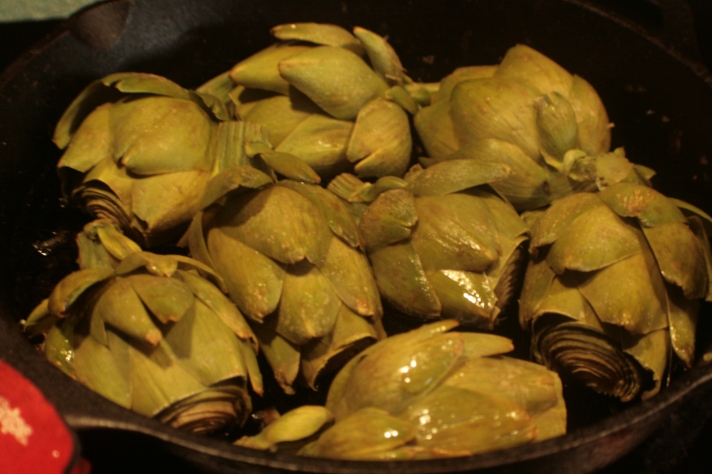 This may have been my favorite step in the whole process, possibly just because the artichokes were so pretty in the cast iron skillet.  Also, they made a nice sizzling noise.  And I was pretty sure at that point that I had successfully steamed them without destroying the colander and also possibly without letting horrible chemicals that will kill us with slow cancer leech into the food.  On reflection, I think next time I’ll use the metal colander.  Or get a proper steaming apparatus. 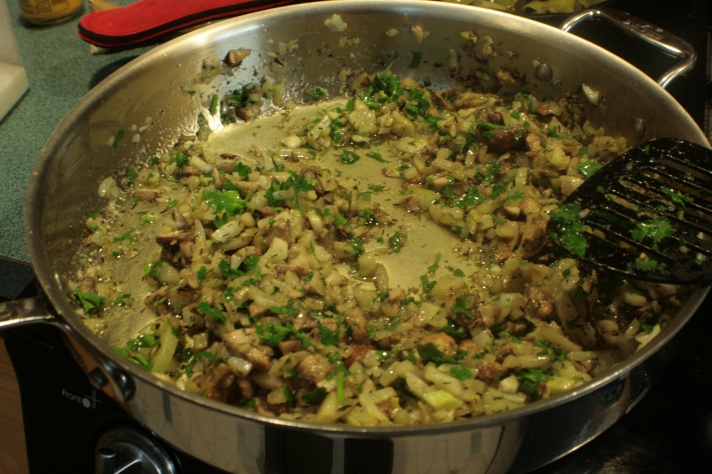 I’m usually skeptical about adding parsley to things, but it worked out pretty well here.  For one, the green brightened up the appearance on the mixture very nicely.  For another, it adding a nice leafy-green bite and flavor that made the whole thing nicer than just some fennel and mushrooms thrown into a skillet.  Between that and my executive decision to douse the whole thing in lemon juice I think I got away with the lack of onion.

The final product was very pretty, and the topping was really nice.  The artichokes themselves…hrm.  So I didn’t figure out until after they were out of the onion what the recipe wanted me to do with the step about trimming the leaves with kitchen shears.  That was, I think, basically to cut away the inedible bits of the artichoke.  Even if I had done that, though, there’s still not really a graceful way to eat the artichokes when presented like this.  The flavors all worked really well together, but I wouldn’t consider this a practical dish.  I’d do the fennel portion of the recipe again in a minute, but I’d probably serve it on top of a starch of some sort instead.