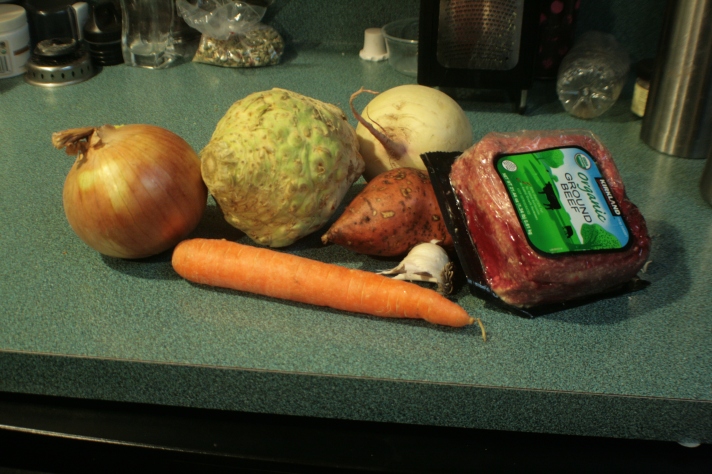 What’s your first thought when you look at that picture?  If it’s “Vegetable score 6, booyah!” then you’ve probably spent too much time in my kitchen.  Also, you’re probably me.  It’s December, but the produce force is still strong with us, so I decided to go for the easiest way to cram a ton of veggies into dinner: pot pie! 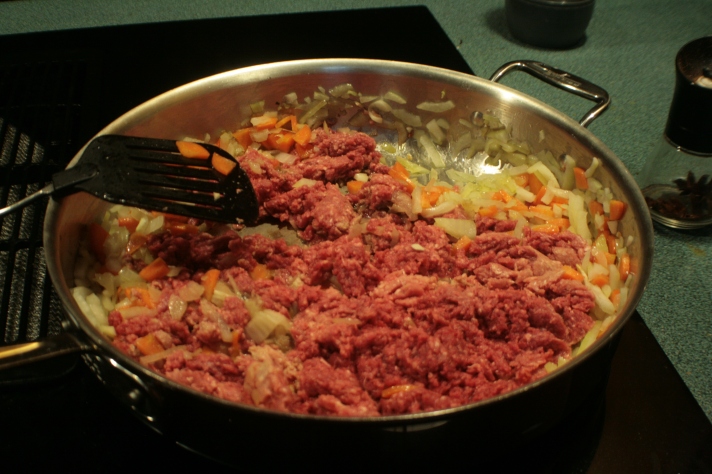 I’m personally not a big fan of ground meat.  There are a few places where I think it works well but usually I’d more or less prefer to have the not ground version.  But I’ve been using chicken as my go-to dead animal of choice more than I like so I decided to prevent a rut and force myself to try making ground beef tasty. 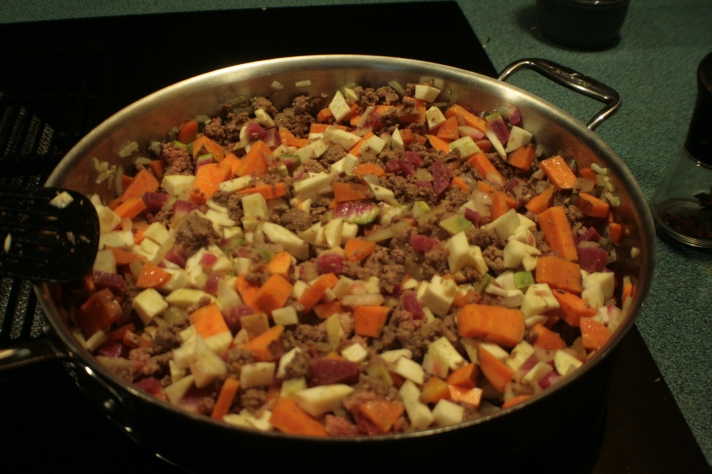 The bright pink things are the beauty heart radish.  Cooking this was lots of fun just because it was so gosh-darnded colorful. 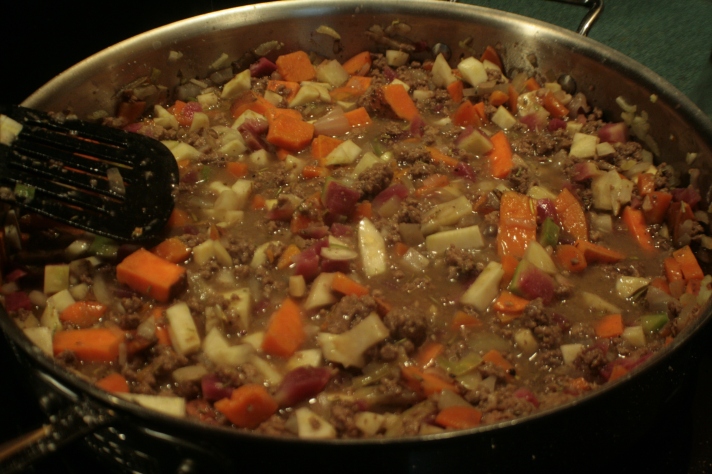 To get a gravy going I just added a bunch of stock.  All the proportions were eyeballed, and I wound up using just half of most of the vegetables, which was the right call.  This winds up meaning that with nothing more than my eyeballs I did a massively better job of judging good portions than half the recipes I’ve used for CSA projects this year.  I say this out loud so that I will remember it, and trust my own judgement the next time I read a recipe and go, “Is that right?  It must be, since whoever wrote it ought to know what they’re doing.” 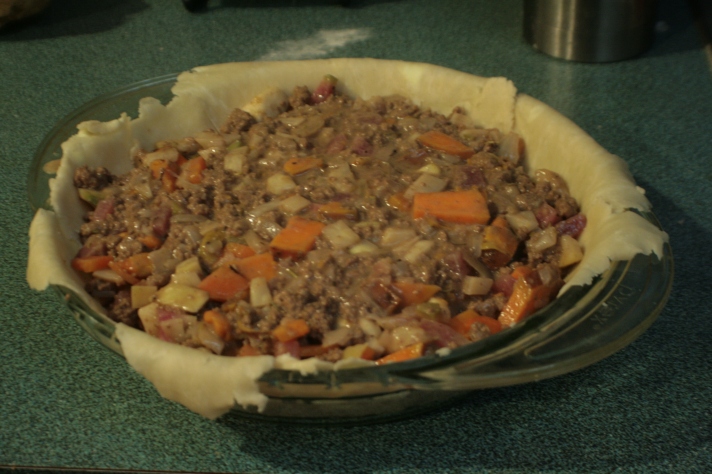 For the crust I used the same recipe I’ve blogged about before, but instead of just doubling it (top and bottom) went ahead and upped it 2.5x.  That gave me more dough than I needed, but avoided the awkward not-quite-enough problem I run into a lot using that pie plate and recipe combo. 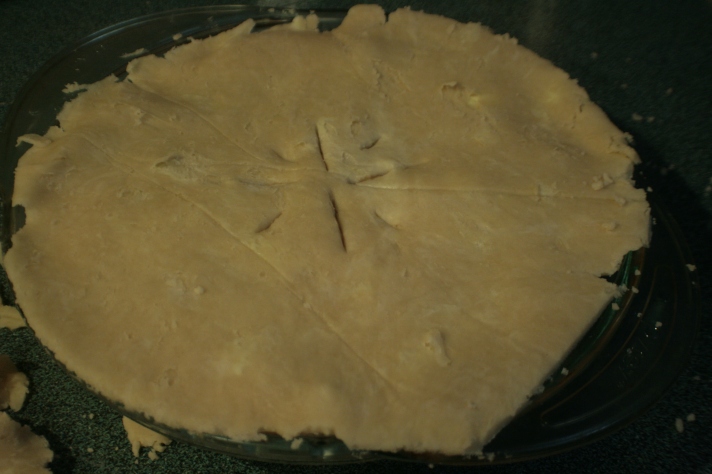 See!  Much prettier than my usual pie, though the handles still thwart true artfulness, and it was a lot easier to work with when I didn’t have to make every scrap count.  I just need to think of something neat to do with scraps of leftover pie dough, and then do this as a regular thing for all future pies. 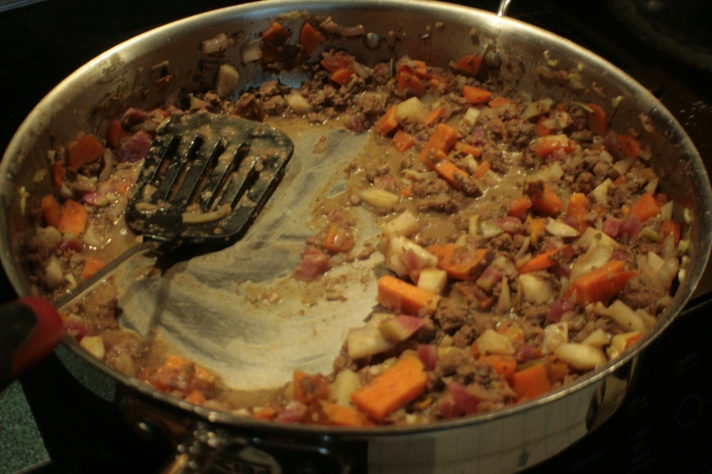 Only half of the filling fit in the pie, but I’d figured that would be the case the moment I decided to use all the ground beef.  The other half has been tucked away in the freezer for some cold, produce-less winter night, and I’ll just be a crust away from another pie.  Or I could make mashed potatoes and turn it into a cattle-herder-pie.  Or do bread dough and make stuffed rolls.  Or…well, I’ll do something. 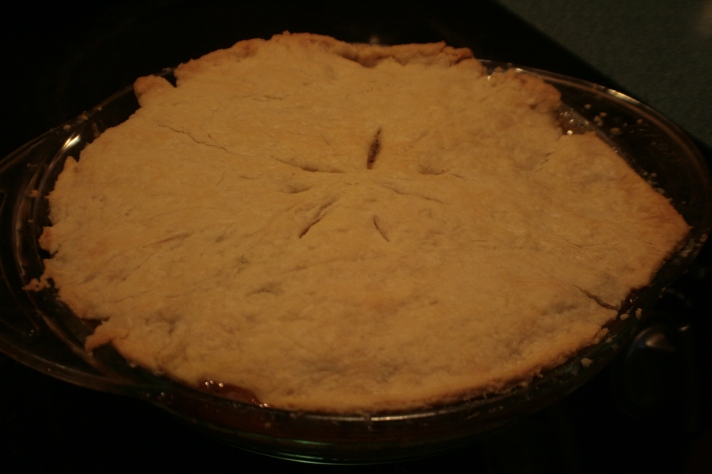 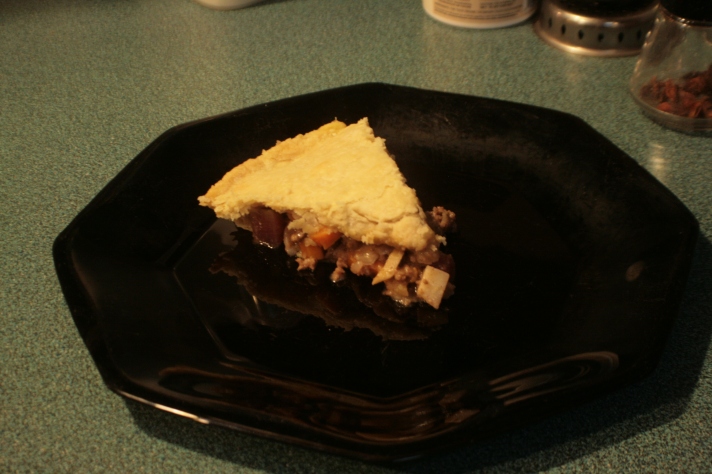 Look at the colors!  It was quite pretty.  The ground beef still tasted like ground beef to me, though.  Nobody else minded, but I’m the only one who doesn’t care for hamburger, so they weren’t exactly a challenge, either.  Oh well.  It was a perfectly acceptable dinner, and the leftovers don’t appear to be fated for lingering, so that’s all I could ask for.