What does a sane, reasonable adult do when they hit a career milestone?  I have no idea; you’ll have to ask one.  I called up two buddies and said, “I’m cooking a fancy dinner tonight.  Want to come eat it? Also, this is a ploy to get people to play Shadows Over Camelot with me.”  They complied.

That’s more or less the ingredients for what I did.  A pack of brats left over from the summer, 2lbs of blue potatoes, a slightly-past-optimal-use-date shallot, and half a beet I chopped for dinner a week prior then didn’t use.  Also, Parmesan cheese, because I was making gnocchi, which is pasta, and cheese always goes well pasta.

The beets I decided to roast since I was firing up the oven to bake the potatoes anyway, and everything else was going to be stove top.  I poured on some olive oil, salt, pepper, and vinegar, then instead of stirring or doing anything else refined, shoved the beets around the baking sheet a whole bunch with my hands until they seemed well coated.  You may want to note “dove in with my hands,” as a theme for the evening.

To, as they say on Chopped, elevate the brats, I pulled the sausage meat out of the casings.  Then I poured in some breadcrumbs, ground mustard, and vinegar and mixed it all up with my hands.  I really like the texture on a brat, and they’ve got a nice, heavy greasiness to them, but this treatment helped pull them into the rest of this dish so it didn’t feel like a slapped a cookout onto my fancy dinner. 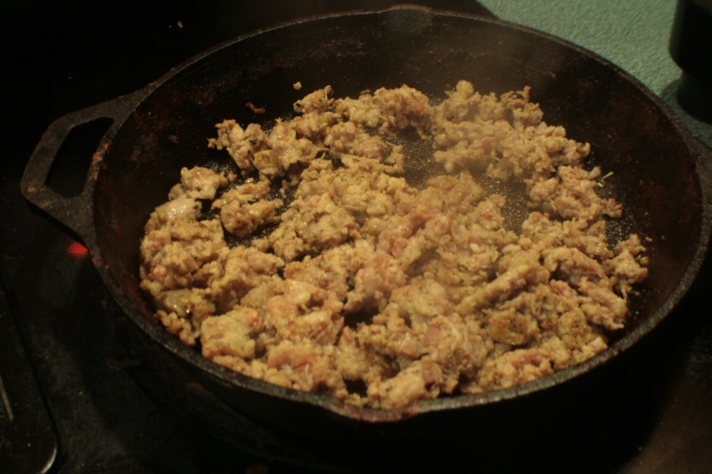 Mmm, elevated sausage in a skillet.

The actual active time for making gnocchi is pretty short, but those potatoes took forever to roast.  (A lot of recipes will say to just boil the potatoes.  I don’t have a potato ricer and moister is the enemy, so I opted for a less hydrated technique.)  I had the flour and salt ready to go well before I had the potatoes roasted enough to pull them out of their skins and mash.  Then I threw in an arbitrary amount of Parmesan cheese.  My rubric was, more or less, “Does this look tasty yet?”  Add the egg and then, you guessed it, dive in with my hands to mix.

By this point the guests had arrived.  One was given the sacred task of reading the rules to the game since I hadn’t actually prepared well enough to know how to play the game I lured people over for.  The other got summoned for things as serious and urgent as, “Uhm, the carton of eggs is right where my elbow is going to knock it to the floor, but my hands are covered in pasta dough.  Could you tuck those into the fridge for me?”  Heavy responsibility, I tell ya. 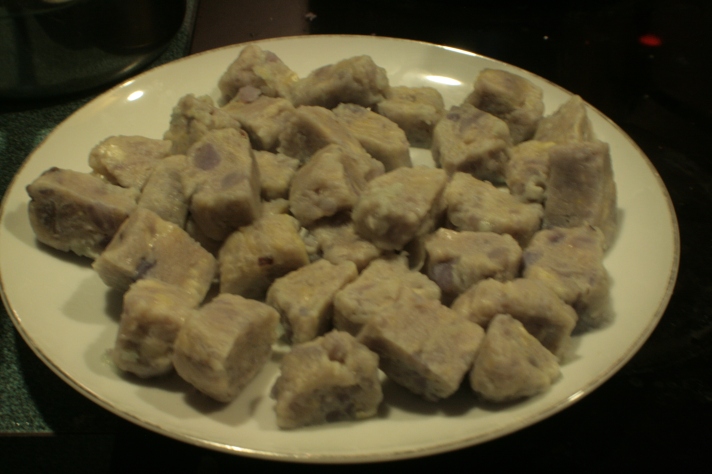 That’s what my (entirely too large) gnocchi looked like after I finished boiling them.  There are no pictures of the dough processing phase because my hands were covered in said dough and I wasn’t about to sully my camera.  Sorry.  But, my major concern with this endeavor, i.e. that the blue potatoes would turn out funky, unappealing pastas, was alleviated.  The blue looked quite nice, I think.

This is the toasting with butter and shallot phase.  One of said guests has an onion allergy, so her gnocchi came from the end of the toasting batch, when the shallot had pretty much been dumped from the skillet.  Yay multi-batch cooking!

And that is blue potato gnocchi with roasted beets and elevated bratwurst, aka Fancy Dinner.  I made a centerpiece and pulled out the place mats and everything.  Would do again.