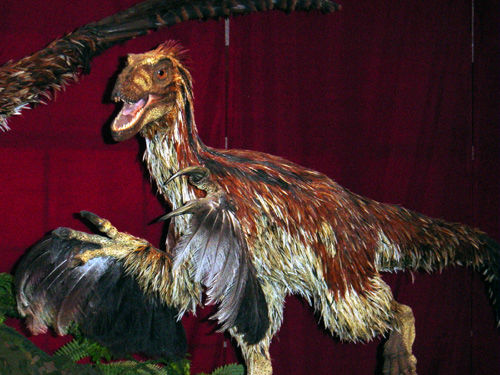 This month’s story for the crucible is Leonard Richardson’s “Let Us Now Praise Awesome Dinosaurs.”  This is one of the more bizarre stories we’ve taken a look at so far: the tale of Martian dinosaurs who’ve come to Earth to do motocross racing.  Because of course they would.

There are several things we could take a look at in this story, not least the choice to focus heavily on dialog to convey the story, but I want to instead take a look at one of the recurring jokes in the story, Tark’s obsession with guns.  The story opens with Tark’s attempt to purchase a firearm, allegedly for self-defense, and failing.

“These are killing claws,” said the dinosaur, whose name was Tark. “For sheep, or cows. I merely want to disable an attacker with a precision shot to the leg or other uh, limbal region.”

It’s signaled pretty clearly up front that Tark’s interest in guns is not for self defense, and also that Tark is a little on the loony side.  But while this line is great for provoking chuckles, it also tells us that Tark has “killing claws” and that they’re on a scale that could slaughter cows.  It also introduces the concept of Tark eating what he kills, if obliquely.  These are all important things that, like the gun joke, play out later.

Part of the same section, but clearly a different actual scene, we get Tark’s true motives.

“I’m gonna branch out. Target shooting. I’ll be like those tough guys in the action movies. Is my chin strap tight?”

This is another line for chuckle-provocation, but also critical to the thematic content of the story.  At the end we get the reflection on how humans’ interest in dinosaurs is actually an interest in seeing their own darker side and being able to engage it.  This is the first hint in that direction, though.  Interestingly, it doesn’t come from a human at all, or even from the more thoughtful Entippa, but from loony Tark.  He understands that in order to maintain his entertainment career he’s going to have to up the stakes of what’s engaging his audience.  It’s not an accident that he chooses an action hero, and it’s not just for the satirical ridiculousness of a creature with killing claws wanted to be a gun hero.  This is where the story says, “Listen up, we’re examining our relationship to entertainment and the implications of that relationship.”  It’s a nice early wedging in of the thematic content, delivered by a gun-shaped absence in Tark’s arsenal.

The thematic work done by the gun continues in a later section when Entippa, very reasonably, starts to address Tark’s obsession.

“You start carrying around a weapon and you become a cartoon character in the eyes of the humans. They’ll strip you to the bone and then they’ll put your bones in a museum…”

This is where we get the introduction of the idea that there’s risk involved in how the dinosaurs are perceived by humans.  What’s interesting is that according to Entippa, the guns will effectively de-humanize the dinosaurs.  There are hints all throughout the story that humans are perceiving the dinosaurs as “other” with calls out to classic othering questions in interviews and interpersonal interaction.  But we’ve already established in this story that dinosaurs don’t need guns, they have weapons of their own.  Yet taking up a human weapon would turn them into cartoons or objects for display in a museum.  There are at least three layers of commentary baked into that.

And for our final appearance of Tark’s gun obsession?  We get a piece of slapstick gold.

“Entippa!” said Tark. “I got it! I got a gun! Check it out!” There was a shot and the sun roof dissolved. “Ow, there’s glass! Stupid gun!” Tark hurled the gun out the driver’s side window and into a bush.

This is the payoff for all the discussion around the gun earlier in the story.  At long last, Tark gets his firearm!  He’s already done a perfectly good job of dealing with the bad guys on his own, but he’s excited all the same.  And then it goes exactly the way Entippa could have told him it would, and, disillusioned, he tosses it aside.  This is a tiny encapsulated retelling of the whole story’s arc.  Neat idea, pursuit of idea, real encounter with the consequences, veering back to original course.

That’s a joke that not only provided several punchlines, but opened up a lot of the space used for the thematic discussion of the story and reinforced the story’s structure.  If you want an example of successful “tight” or “sparse” writing, this is how you do it.

What did you take away from this story?

The future Crucible schedule will be announced next week.  Look for it!