Friday was John’s last day of vacation since he had to fly back to work painfully early Saturday morning.  We had theater tickets for the evening, and a date with fried chicken for lunch.  We made up the rest of our plans over lunch and on the fly.

Lunch was at Fiorella’s, which is touted as the best fried chicken in New Orleans, particularly by the horse-drawn carriage tours that go by every ten minutes or so.  It was thoroughly competent fried chicken.  I described it to John as, “Technically perfect.”  The breading had excellent crunch, the chicken was juicy and moist.  But the breading lacked character – the flavor came mostly from the Tobasco we poured on after the first bite.  There was nothing wrong with this meal, except that I strongly suspect I could have gotten something more exciting by going for a local specialty somewhere else.  New Orleans =/= reliable source of all Southern cuisine.

After lunch, John acquired a porcelain Mardi Gras mask for his office mask collection, we returned to the hotel room just in time to bother the maid cleaning our room (temporary released from her tortuous existence as a fresh coat of paint), optimistically grabbed reading material for a leisurely afternoon reading somewhere pretty in the Garden District, and hopped a street car.  Our immediate destination was Sucre for chocolate. 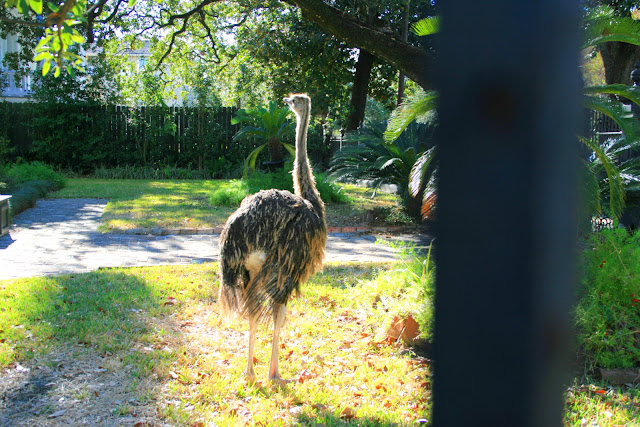 We spotted that in a yard on our way from the street car to the chocolate.  No, I have no idea why that seems like a good idea to somebody.  I can tell you this; that’s awesome, and I want one.

“I want one,” was my theme for the afternoon.

New Orleans is overflowing with candy shops.  I generally think of Madison as having an excellent scene for fancy chocolates, but New Orleans puts Madison’s offerings to shame.  I was very full of fried chicken, so I only had room for one chocolate, but on the theory that liquid calories don’t take up space, added on a cup of hot chocolate. 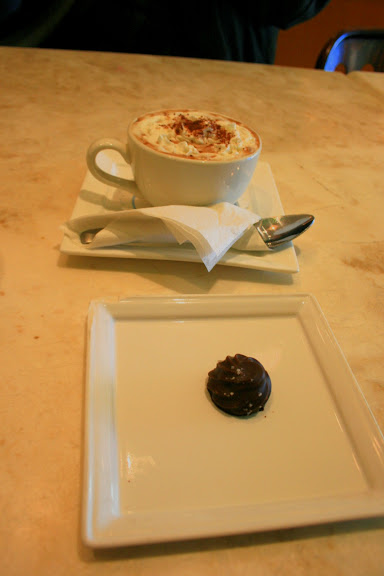 Remember those theatre tickets we have?  Well, they tried really hard to render the logistics for our day gruesome.  The play put up by a fairly impressive community theatre troupe across the river, which apparently only has two crossings; one in the French Quarter near where we were staying, and the other on the opposite side of the city.  Reading through the guidebook I got a little carried away over one of the restaurant descriptions and insisted we had to have dinner there.  It was so far across the city that it made more sense to take the crossing farther away from our hotel, so we decided we’d get a cab from the restaurant to the show.  Between chocolate and dinner we’d wander vaguely restuarant-ward until we got tired and took the street car the rest of the way.  “Could we just walk to the restaurant?” I asked John as I tried to cope with the different map scales from neighborhood to neighborhood in my guidebook, and he was cheating with his magic phone.  “No way,” John said.

St. Charles street?  Love.  Every other house on it provoked covetous lust and I am not ashamed to admit it.  Old Southern mansions on streets with giant trees and a street car running up and down the median?  I’ll take three, thanks.  This was when New Orleans finally clicked into my personal categorical framework; St. Charles street felt like Richmond, Richmond feels like home, I was home, why dont’ I have a bajillion dollars to buy all the houses?  And the furniture and art and rugs and…

John spent a lot of Friday humoring me.  And picking on my work habits. 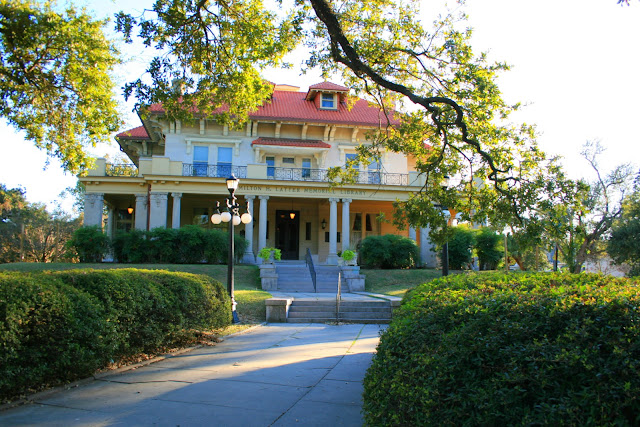 That’s a public library.  Library!  No, I am not ashamed of the lust.  I’d live on that street in a flat second…then run screaming the second the weather starts to get warm.

“Oh, it’s an old knee injury.  My knee does that when it gets tired.”

“Should we sit down, or catch a street car, or something?”

Yeah.  We walked all the way to the restaurant. 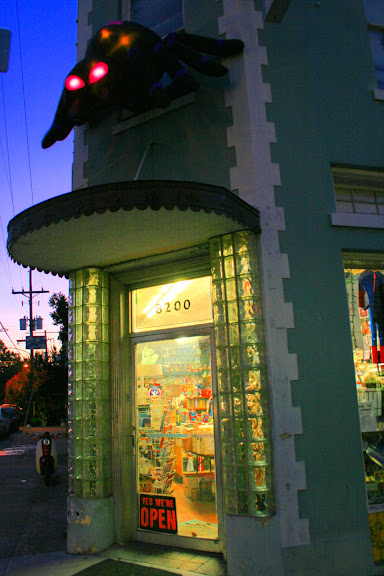 Pausing a moment to say that this comic shop was awesome.  I think I’m going to make accidentally stumbling onto an awesome comic shop at the end of a trip a tradition for all my vacations. (Did I really not blog about the comic shop in Reykjavik?  Bad me.)

Alligator bacon cheesecake and a steak served with oysters, blue cheese and hollindaise sauce. That was  what so ferociously caught my attention in the guidebook, and landed us at Jacques-IMO. 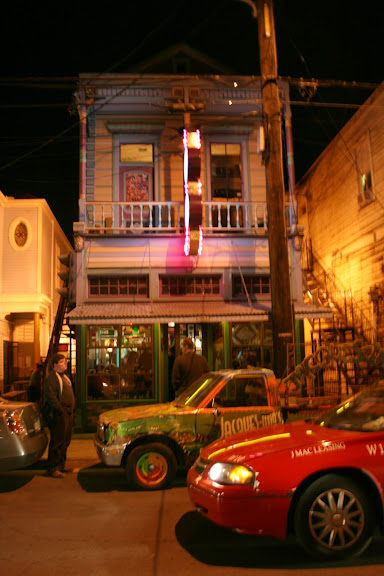 This place was fun.  Seriously.  We got there early because we wanted time for failure to get to the theatre.  You walk in to a super tiny bar area with a hostess stand at the back.  To get to your table, the hostess than leads you through the kitchen, to the still-cramped but roomier back where the tables live.  The walls are covered in these really great murals, the music is up-beat and invigorating, and the wait-staff are on the ball.  It would get a recommend even if the food weren’t great.

The cab ride to the show was mildly hilarious.  I would not, ever, recommend you use the same cabbie, but I’m glad we got him.  John and I bantered, cabbie assumed we were married, remained skeptical despite assurances that, no, really, would people please stop cajoling him to buy me things.  Cabbie once thought about getting a Real Estate license since he knows a lot of people, but didn’t.  Cabbie did not know his way around at all and wound up getting directions from John, who was using the GPS on his phone.  Cabbie was also openly fuddled about why tourists would go to such lengths to see a play.

I’ll write a review for the play some time if I get time, but there are no pictures and it would be too long to cram into here, we’ll sum it up as “Enjoyable,” and skip to the ride back.  We had the cabbie take us to the pedestrian ferry.  During that ride he stopped at green lights, ran red lights and stop signs, skipped a toll by going in the clearly marked exit for a police station, and regaled us with a story about a fare who tried to pay in marijuana even after the cabbie claimed to be a cop.  (He’s actually an EMT, if what he told us on the way to the play can be believed.)  Half way through the trip I passed John a note I wrote on my phone: Please use a different cab to get to the airport tomorrow.  He did. 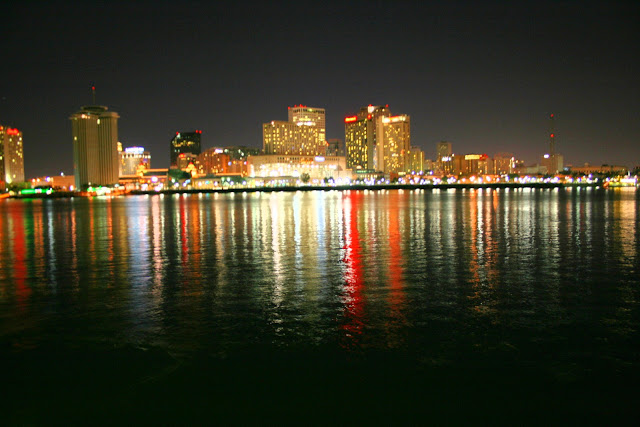 We got back to the room late enough to reasonably go to bed, did some packing, then packed in.  I suppose John’s alarm must have gone off and he did all his getting dressed gathering things at early o’clock.  I was a sensible person and slept through it.

Which brings me to my last bit of time in New Orleans.  I diligently checked my train ticket times to make sure I was right about it being at 1:30, discovered it was actually 3:30, and set out to finish eating all the things I hadn’t gotten to.  Also, to buy jalapeño jelly (mind still blown) and a magnolia scented candle (because you can’t find them in yankee country).

The street musicians on Saturday were not as good as the ones during the week.  The performers were mediocre, too.  This amused me a lot.

Had breakfast at cafe beignet, where I got a croissant and listened to live Spanish guitar.  Went for lunch at Stanely’s where I got a Korean BBQ po’boy.  It was tasty, but not twice as tasty as everything else on the menu despite being priced that way.  The sweet potato fries were great.  I ordered a muffaletta to go for dinner on the train, thereby ensuring I hit all the essentials, and proceeded to do more wandering and kill more time.  Went to a candy shop and ordered a Jackson Square, which had caramel and peanut butter and crisp rice in with the chocolate and I highly recommend it.

I also accidentally ran across the end of a parade of some sort.  Neat. 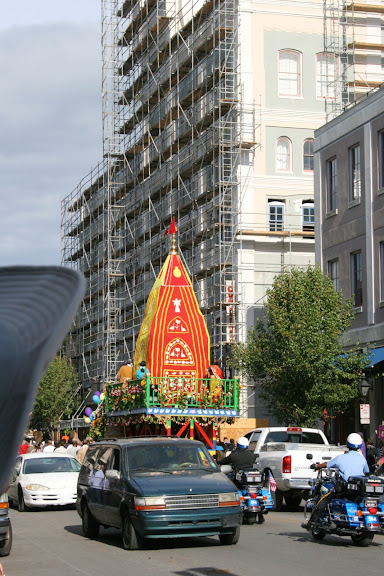 Earlier than required, but I was feeling insecure, I returned to the hotel, collected my luggage, and caught a cab to the train station.  I swear, everybody in this city knows everybody else (the bell boy bantered with four different taxi drivers and a bouncer while loading my luggage), and that’s really fun.

At the train station I went to the desk to ask about upgrading to the sleeper car for the train to Chicago.  “But that train already left.”  Yeah, 1:30 was right and I should learn to read.  After looking at plane tickets to Memphis, to Chicago, and trying to book with Enterprise (thank you free internet from Subway, via pilfered network code given to me by Amtrak man) I managed to book a one-way car rental from New Orleans to Memphis, the first and only place I could conceivably catch up to the train.  “So, how big are the cops on speed traps between here and there?” I asked on my way out.  “You should get going right away,” Amtrak man said, very encouragingly.

Taxi to the New Orleans airport, Hertz rental completed (Yay gold member standing!), I got into the car, conveniently armed with dinner, and said goodbye to New Orleans. 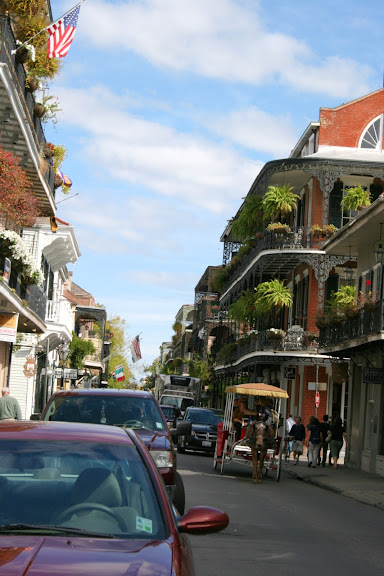 Did you know that you can get from New Orleans to Memphis in exactly five hours?  Now you do.  Also, I’m a moron, but you should have guessed that when checking my train schedule was important enough to mention explicitly.

There was a bit of adventure in getting from the Hertz rental to the cab.  Namely, the Memphis airport shuttle driver didn’t think I should pay the premium for a cab pickup from the airport, went off his route to stop at a gas station, then got off the shuttle, assuring me that he was going in to call a cab for me.  “Self,” I said to myself, “Nobody knows where you are, you are distinctly not where people expect you to be, and this is slightly sketchy.  A normal person with a reasonable sense of self-preservation would be concerned about their safety right now.”  “Meh, this is kinda funny, and I’m not sure I’m willing to admit this ever happened,” I replied.  “Surely there’s a quota on the amount of stupid we can be in one day.”  Self and I compromised with a geo-tagged google+ post.

The shuttle driver came back, stubbed out his cigarette, and finished arguing with the cabbie he had on the phone.  “It’s only ten minutes away.  That’s still absurd,” he shouted into the phone.  He hangs up, tells me that if I wait here, I can get a cab for $25, vs the $30 from the airport.  “Honestly, it’s worth five bucks for me to get there faster,” I say.  Reluctantly, the shuttle driver takes me to go get ripped off more thoroughly.  See, sense of self-preservation, everything was fine.

I caught the train.  I got two seats to myself.  It was dark, and quiet, lacking in screaming children or emphysema patients, and I slept pretty well.  But first I did some writing.  And a bit of reading.  Say, three hours worth.  Hardly the literary indulgence I’d pictured, but hey, the trip was chock full of story.  That’s better.