Things wot I have been up to

First off, everybody in Madison should check out this auction for the Dane County Rape Crisis Center.  Among the really nifty items there is a crit from one of my critique groups.  You know you want to donate money to charity in order to have my tell you how you suck.  Trust me.  I only made somebody cry that once, but for charity, I’ll do it again 😉

I voted for Art.  You’re voting for Art, right?  Not to be repetitive or anything, but Art for Gov.

I finished Udacity’s CS101 course and achieved a Certificate of Accomplishment with High Distinction.  I’m pretty fricken’ proud of that, given that my two week out-of-town-stravaganza coincided with the last two weeks of material for the class.  My current plan is to do one class at a time from them until I feel like I know everything I want to, or I admit that I’m way too busy to recreationally pick up an unaccredited degree just because it’s awesome.  I’m in 212 now.

I sold a story to Penumbra.  More details once signed contracts happen.

Speaking of signed contracts, Realtor me snagged one of those Friday night.  I’ve had a few in the pipeworks for a while now, but this was the first one to finally get ink on paper.  Yay!!

Helped Idi cope with the trauma of having 2/3 of her parents in Ireland.  She’s the loneliest! 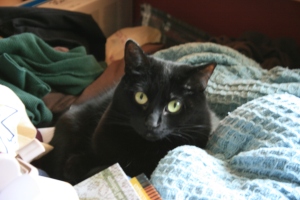 Sure, it looks like I’ve bothered her while she’s napping in the fabulous nest of squishy things that is Sylvie’s bed/laundry-and-yarn storage device.  In reality, she’s in desperate need of solace.

Also, replaced the light bulbs over the steps.  I think they’ve been out for about two years.  Apparently, you can actually see the steps when there are working bulbs in the lights.  Weird.

Really, though, this post was an excuse to shill the RCC auction.  Everything else here is just to make me look cool for people who want to know whether a crit from me is worthwhile.  The answer is that, yes, yes it is.