Sylvia won for being the closest to guess my first partial request date.  Her requested prize was that I design a pie for her.  This, I think, turned out harder than just making her a pie, because I stressed a lot over making sure I had a recipe that would be good enough to be equivalent to somebody else making her a pie.  Ultimately, I opted for what is probably by far the most popular pie recipe I make: Strawberry Rhubarb.

I also decided that just sending her a recipe wasn’t good enough, and since the easiest way I can think of for posting directions with photos is to do it here, bonus food entry!

This recipe starts, like many of my favorite desserts, with chopping up a bunch of strawberries. 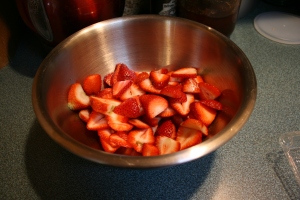 Then you mix them up with the rhubarb, sugar, tapioca, salt and flour.  Do not forget the salt.  Do make sure to stir them together pretty thoroughly so everything absorbs fairly consistently while it sits. 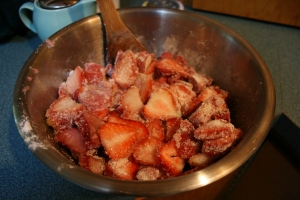 That needs to sit in order to get properly gooey.  Gooey is a technical term here.  Pie is all about balancing acts executed with fat and liquid.  Also, being super tasty.

While it sits, you get to play with pie crust.  People fear pie crust, but I’m not sure why.  There are two tiers of mistake you can make, but as long as you cope well when you make a first tier mistake, you never see the second tier mistakes and your crust is still good.  So I guess my advice about pie crust is to not panic.  Pretty pies are nice, but not required.  You can hide any ugliness under whipped cream.  (Or creme fraiche, if that suits the pie better.)

The biggest thing to keep in mind with pie crust dough as that this is not bread dough.  You do want the butter cold.  You do not want to knead.  It gets flaky and good precisely because the ingredients are uniformly distributed.  So when the recipe says to cut the fats into the dry ingredients until you have a texture like coarse sand, what they mean is that it should look like this: 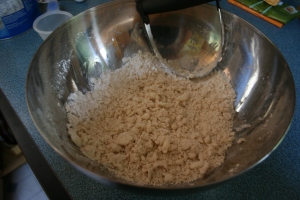 This step is where the delicate fat balance comes into play.  There are whole dissertations about the best fat types and ratios in a pie crust.  I’m consistently pleased with a crisco butter mix, on both flavor and texture fronts.  A crisco substitute in this recipe is the one place I’d consider permitting margarine into my cooking.  You’re likely to see me go for lard or bacon fat first, though.  (Actually, now I’m wondering about bacon fat for a savory pie crust…)

There are two places people are likely to screw up their pie crust, even with pictures.  The first is this next step here, where you start adding the liquid.  You’ll need a bit of something acidic.  Lots of recipes call for lemon juice.  I use apple cider vinegar for this recipe.  The important bit is to mix it in with some of the water you’ll be adding, or it won’t get distributed evenly enough.  I tend to measure it out into a little bowl, then tip in some ice water from a drinking glass and swirl.

The mistake happens with the next part, because it’s a judgement call.  You need to add enough water to get the dough into a blob you can work with, but not so much that it turns into a soggy, sticky mess.  I’d suggest erring slightly on the side of too much water because you can fix your crust if it sticks and tears, but re-kneading to add water sets you up for the second mistake people tend to make with their pie crusts.  That second mistake being:

Do not, if you can at all avoid it, roll out your dough more than once.  Overworked pie crust dough gets tough when you want it flaky.  It lets your fat warm up too much, distribute too evenly, and do all sorts of other chemical/structural things you want to avoid.  Surgical repair is okay.  Going to the trouble of a from-scratch crust for something you could have bought out of the freezer section is not.

You’ll note that I have the dough on a sheet of wax paper.  It’s a magic trick I learned from the Ultimate Cook Book which, incidentally, is also where I found this recipe.  The book isn’t brilliant about everything, but it rocks its pies, and I adore its waffle recipe.  And it’s worth the cover price for the wax-paper pie crust trick.

You put another sheet of wax paper on top of the dough, then roll it out between the two sheets.  Dough does not stick to your counter, or your rolling pin.  This gives you more wiggle room for mistakes with over-watering your dough, not to mention making cleanup easier.  It also makes the counter-to-pie-plate transition much, much simpler.  Like so:

With this particular pie I took my own advice, erred on the side of too much water, and went slightly too far.  So my bottom crust was not ideal.  But you know what?  Nobody sees the bottom crust.

That crust shredded itself when I pulled the wax paper away.  I just scraped off the bits that stuck and pressed them back into the pie plate.  Who cares?  Ten seconds later, it looked like this.

The top crust being pretty matters a bit more.  If you’re really worried you can do thing where you slice it into strips and do the lattice crust.  It is pretty, but its also about three times as hard and time consuming.  Your call.  I opted for lazy.  And, as is common for my top crusts, because they get made with dough from the bottom of the bowl, it behaved a lot better than the bottom crust did.

Then do your trimming/folding/edging in whatever fashion strikes you as aesthetically appropriate.  This is the step where I come to really hate the handles on this pie plate.  I love them at every other stage, though.  If I’m after a pretty pie, I go for a custard based one that I can decorate with whipped cream and chocolate.  This pie is all about gooey strawberries. 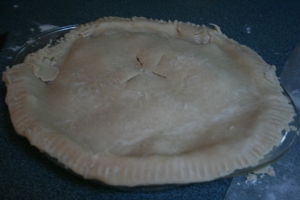 See what I mean about the handles cramping my style?

There is no doneness test for pies the way there is for cakes.  It’s all about eyeballing it.  If you want to know whether your pie is done, ask yourself two questions: Is the inside bubbling and is the crust delectably brown?

See the goo oozing up in the upper left corner?  This pie is done.

I’ve emailed the actual recipe to Sylvia so she can go do this on her own.  I hope it turns out adequately tasty!

Also, since Sylvie (the roommate, not the winner) was the only one to propose a penalty, she got curry chicken salad.  In keeping with the pics or didn’t happen custom of the internet, I hereby provide evidence of my punishment. 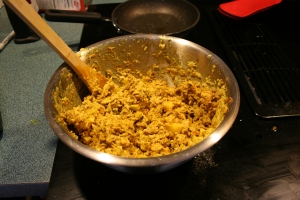 Let me assure you, my suffering was immense.