The second of August’s recipes I picked out was the ginger custard.  This is basically a ginger flavored créme caramel, for anybody wondering where we’re headed with this.  And after the rice pudding weirdness, you’d be right to wonder.

Créme caramel is a thing with which I have experience, especially since it is the superior of the three major custards (flan, créme brulee, and créme caramel).  Sorry egg yolk and burnt sugar fans: you’re wrong.  There’s nothing to be done about it save admitting your error and acknowledging the correctness of my view.  Don’t worry if you can’t manage this just yet – people who like Dr. Who for the wrong reasons are making a bigger error and I’m coming for them first.

The recipe claimed a yield of 16 custards.  I took one look at that, one look at the number of people I was going to see between cooking and leaving for WorldCon, and decided to halve the recipe.  Then I went to the cupboard for clean ramekins, only had 7, and decided that the yield on the recipe was probably wrong anyway and 7 would work just fine.  You’ll note a theme for this project and it was this: Blatantly disregarding the recipe.

For example, I did not halve the amount of ginger I chopped up to put into the custard.  In fact, I’m pretty sure this is more than the 2TB the full recipe called for. 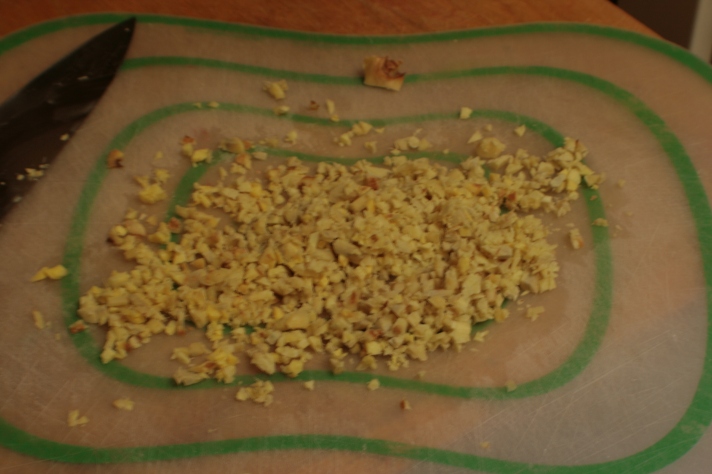 I realized what I’d done in plenty of time to take corrective measures.  Just because I’d chopped way more ginger than I needed didn’t mean I had to use it.  Then again, just because the recipe said I only need 1TB for 7 custards doesn’t mean it has any idea what it’s talking about.  There wasn’t enough rice in the rice pudding.  And there wasn’t enough ginger in that tea cake I made in May.  Sure, I’d screwed up and misread the recipe, but you know what?  Screw the recipe.  I’m only still cooking out of this book for the sheer spite of not letting it defeat me.  I’m using all the ginger.

Throw that in with some milk in a pan and bring it up to scalding temperature.  Then, let that sit to cool and infuse while you make the caramel.  The caramel making was a bit weird to me.  For example, the first step was basically to massage lemon juice into the sugar.

Does that sugar look happily massaged?  I mean, I have a pretty good idea of what I look like when I’ve been properly massaged, but I’m entirely too bitter to be a good reference for massaged sugar.  There was no hint of lemon in the caramel at all, so either I should have gone ahead and doubled the lemon juice, too, or my sugar massaging skills need work.  I’ll leave it as an exercise to the reader to determine which explanation I’m leaning toward.

Caramel making is one of those things that’s theoretically very simple, and actually requires a bit of technique.  All you have to do to make caramel is burn sugar.  The trick is, you have to do it correctly, or you have, well, burnt sugar.  Lots of recipes will have you add a bit of water or corn syrup to the sugar to reduce the odds of screwing up.  This recipe basically told you to put the sugar in a pot over medium heat, stir, and pray.

The picture is blurry because taking one handed photos while stirring is hard.  But I really wanted process photos, since caramel is all about spotting when you’ve reached different stages by eye.  This is early on in the caramelization stage, where things are starting to liquefy enough that you get clumps of sugar.  Honestly, until things start to liquefy, there’s no reason to stir.  Once they do, stir, stir, stir.  Especially if how hard your caramel is will matter. 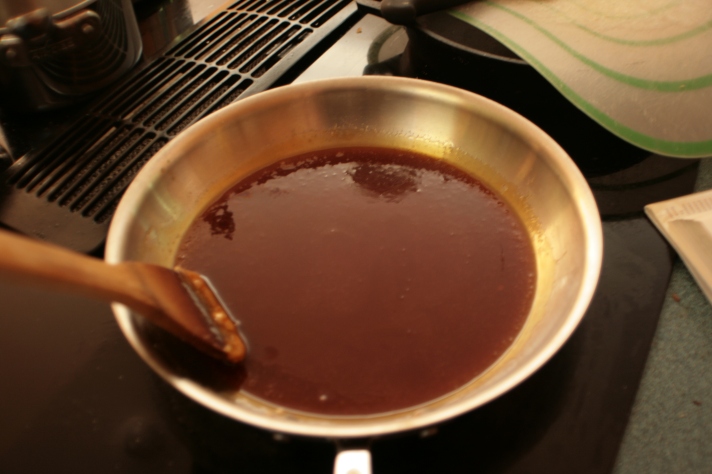 This caramel is done.  Get it off the heat and to where it needs to go, now.

Except the cookbook said to shock it with cold water first.  This makes sense in theory, because it saps the heat, keeps the caramel from continuing to cook, and thereby stops you from crossing from the land of tasty into the land of OMG WHY WOULD YOU BURN SUGAR?!  I say in theory, because what it also does is immediately harden the caramel.  Which you don’t want.  Because it’s going into the ramekins.

I followed the instructions in the cookbook.  I got six of my seven ramekins filled, then put the pan back on the burner to get the caramel liquid enough for the seventh.  That barely worked.  I would not have managed enough for an eighth, as the rest of that caramel was very, very done.  It would have overcooked before melting again.  So, good thing I had already decided we were only making seven.  Or bad thing I keep following the instructions when they’re obviously stupid.

Then it was time to go back to the milk and ginger to finish off the custard.  That involved whipping some eggs and sugar together, reheating the milk to scalding, then pouring the hot milk into the egg mixture.  This was all too simple to bother taking pictures.  But that brought us to a stage which, after the rice pudding, suddenly looked way more exciting than it should: straining the ginger out of the custard.  I definitely didn’t want little bits of ginger cooked into my custard.  I also definitely didn’t want to jump through the straning-hell I went through with the rice pudding.  This step almost talked me into switching up to a different custard recipe when I was doing my grocery planning, but I stuck it out.

And was rewarded with success.  It strained without problem.  Yay!

It’s smooth sailing to the finish from there.  Just pour the custard into the ramekins, slap those into the oven in a water bath, and we’re…oh, wait a minute.  Water bath.

I went on at length about water baths when I did the cheesecake, so I won’t repeat myself.  You’ll recall the giant turkey roasting pan I use for cheesecakes.  It’s a pain in the ass for an 11 inch spring form pan.  That goes treble for 3 inch ramekins.  So I was planning to use a glass roasting pan instead, which is much easier to handle, and proportioned more reasonably for the smaller dishes.  Except this: 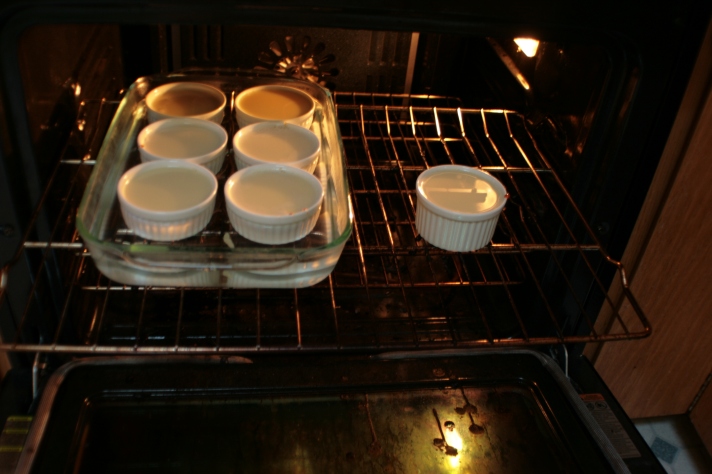 I had a quick decision to make.  Either switch everything over to the giant roasting pan, or leave little exile custard out and see what happens.  I’m lazy.  And curious.  One of those custards got left out of the bath.  For Science!

This is what it looks like when you come out of the oven and you’re one of the in-crowd.

And this is what happens when you’re left out on your own, with no body of water to thermo-regulate for you.  Poor little bugger.  The difference is even more striking once you unmold them. 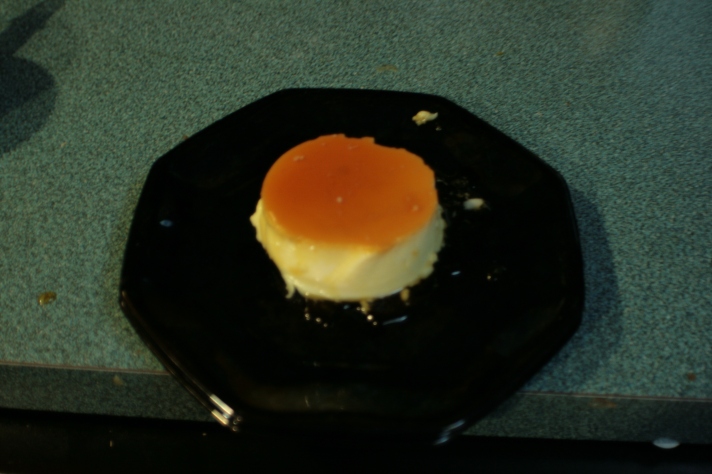 That looks like what you’d expect from a créme caramel knock-off.

And that looks like a custard that needs a hug.  Or possible that was hugged and shouldn’t have been.  Either way, wow.  Water baths, they are a thing for a reason.

As it turns out, the ginger content of these custards was exactly right for something claiming to be ginger custard.  The caramel needed to be more lemony or, really, anything at all – it was underwhelming.  And the technique described in the recipe gets a big fat No.  I’m probably not going back to this recipe ever, but it has inspired me to, the next time I make créme caramel, experiment by infusing it with something like ginger.  Or something very tart.