I mentioned quite a while back how very intensely I hated Unity, the new desktop environment Ubuntu switched to.  It was part of this inexplicable trend to turn desktop and laptop interfaces into something more suitable to a device with a touch screen and, given the intense minimalism of my preferred environment on my tiny netbook, giant icons with full-screen menus are pretty much the opposite of what I want.  I tried Kubuntu and Xubuntu briefly, didn’t click with either, decided to switch distros and then…well, I got a bit busy.

Which brings us to July, when I have time again.  I settle down with a flash drive and my external backup hard drive and do a full system backup.  Then I format the flash drive to install an image for Linux Mint, which came highly recommended.  Except I’m a moron and formatted the back up hard drive.  Three times.  That was a fun afternoon!

It took a while to run the recovery on the backup drive.  (There were files on it that I don’t have anywhere else.  I know, I know, backup fail.)  Then it took a while longer to sort them and be sure I had everything safe and sound.  So it wasn’t until yesterday that I finally got around to doing the install.

OMG, this is just like Ubuntu before Unity, and system performance is better, and I’m not inexplicably missing basic programs that should be installed by default and this sentence is run-on to express how very happy I am with this development. 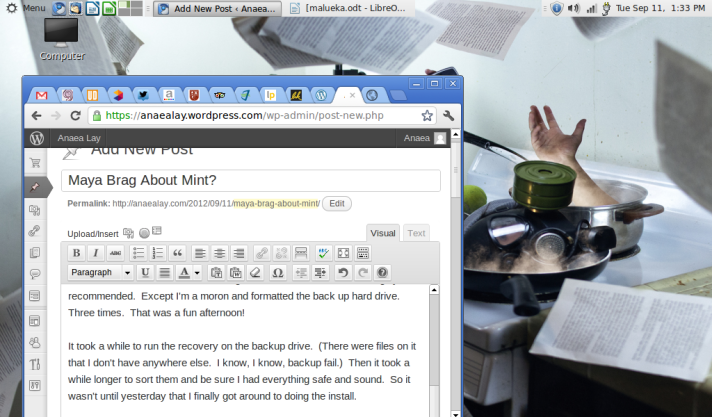 If anybody is looking for an operating system that is exactly what Ubuntu was before it turned into molly-coddle central, so far as I can tell, everything you’ve heard about Mint is true.  I had to install Chrome since the included browser is Firefox, but once I did, it still remembered which tabs I’d had opened in the other operating system.  (Yeah, separate /home partition!)  I literally just took five minutes to rearrange the panel and tweak the colors a bit, then went on as if nothing had changed, except happier.

This is, of course, the honeymoon phase, but if you don’t hear shouting, assume I’m still happy.