They Offered Helen, I opted for Clytemnestra

You’ll note there was no blogging about the rest of the September meringue recipes.  This is not because I’m behind on blogging, but because after carefully combing through every recipe in that chapter, I was so overcome with meh I decided to skip the rest of the month.  They didn’t look particularly tasty, they didn’t look particularly fun, and they didn’t look challenging enough that I’d get interesting disaster stories to blog about.   Also, the weather was nice, so spent my cooking time on biking everywhere.  (Did you know that I can bike all the way to Jade Mountain in less than an hour, even if I’m being slow and taking my time?  I didn’t, either) October’s looking better.  It’s the “Desserts for plated presentations” chapter.  I put this one in October because it’s when I throw my Halloween party.  That was stupid thinking, since the food at the party is buffet style but I’m coping.  Which brings us to our first October recipe, Pears Hellene.  This is after Helen of Troy, via an opera popular at the time, or so says the fun text before the recipe.  This is basically a poached pear on top of ice cream on top of sponge cake.  I’ve made all of these things, just never put them all together before.  So, naturally, I decided to spice up the adventure by giving myself 2.5 hours to get the dessert put together, plus do all my post-Open House follow up thingies, and all of my pre-Crit-group house cleaning.  This was rendered not totally insane by cutting corners and buying ice cream instead of making it from scratch. The recipe gave off the distinct impression of feeling that I should have sponge cake just lying around.  Clearly the Professional Pastry Chef does not live in my house.  Sponge cake does not just lie around.

We’ve been over sponge cake here before.  This is the “beat eggs over hot water” phase.  It’s followed by the “beat until not hot anymore” phase.

Lookit!  Cake batter!  Yeah, okay, not the most exciting thing in the world at this stage.  The “not enough batter to actually fill out the cake pan” part was pretty exciting, though.

All told, this wasn’t too bad, except that this gave me almost exactly enough sponge cake for the rest of what I did, except I halved  the number of pears.  If I’d gone for the full recipe, I’d have been short on sponge cake, even absurdly thin sponge cake.  Truly, this cook book went through major kitchen testing before getting published.  Not. 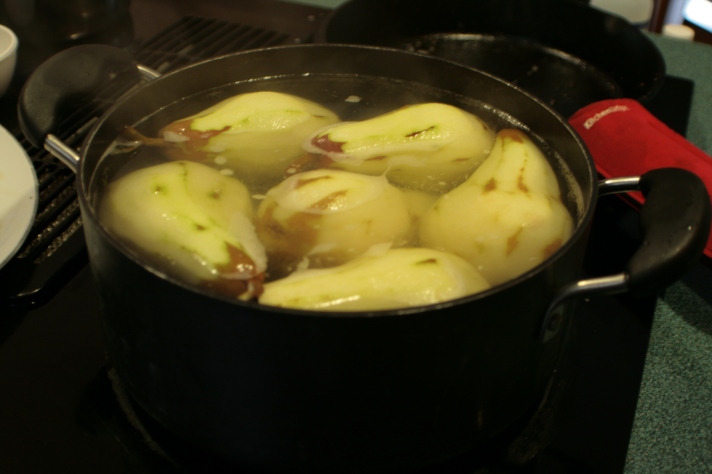 I picked up a pretentious cookbook several years ago looking for recipes I could use to show off.  This is where I first encountered the concept of poached pears, and I’ve become quite fond of them as a consequence.  So when the Professional Pastry Chef gave me helpful instructions of the, “Boil for five minutes, then simmer until done,” I broke out that other book to see if I had time to clean things.  I did.  It’s as if that other cook book is useful.

One thing the Professional Pastry chef adds which my pretentious cookbook did not include is slicing open the bottoms of the bears to remove the cores.  I got way better at this with practice (you’ll note the torn pear on the left as an early attempt).  If you’re doing this, do make sure to cut the pears far enough to get good access to the core, while still keeping the necks in tack.  Cutting too shallowly leads to ripping off chunks of pear while digging through its innards.

Assembly was pretty fun.  Put a little round of sponge cake on the plate, then drop some ice cream onto it.  Then, top it off with a pear, 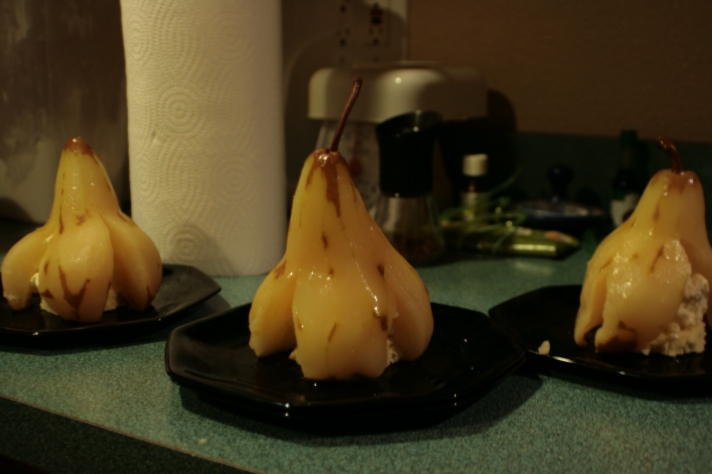 Slap a pear on top, and viola, the plate that launched a thousand ships.  Or something.

This was nice, and if I’d bothered to be thorough in my skinning of the pears would have been sufficiently pretentious for when I want to show off.  But I like the results from the poaching syrup my other cookbook uses better.  The sponge cake didn’t add much more than something to keep the icecream from getting messy, and the vanilla ice cream was a bit plain as a thing to go with this.  I’m wondering whether a brownie might not work better as a base.

Since I could only fit six of the eight pears into my pot, I went ahead and served the remaining two pears as dessert for Tuesday’s dinner.  This time, though, I warmed up some ganache I just happened to have in my fridge and drizzled that over the final product.  It was a huge improvement.  I call my creation Pears Clytemnestra.  Because she was cooler than Helen, and that’s how my kitchen rolls.

2 thoughts on “They Offered Helen, I opted for Clytemnestra”