The Hands Down Best Part of Writers of the Future

There are two sides to the “of the Future” contest, the Writers and the Illustrators.  Before going out for the workshop I’d paid exactly 0 attention to the Illustrators side.  I know a bunch of artists, have massive appreciation for visual arts, but don’t actually know all that much about how that side of the industry works.  Then I got there and there were twelve artists and this whole other parallel thing going on and I was immediately fascinated.  I knew, intellectually, that one of the artists had done an illustration of my story, but I hadn’t really put any thought into it.  I’ve had stories illustrated before (the artwork Waylines has paired with A Long Fuse to A Slow Detonation is nice) and there were about hundred thousand other things that were taking up my brain space.

Then they did the reveal on Thursday.

This was both the simplest moment of spectacle Author Services aka ASI (the people who run the contest) arranged and, for me, the most effective.  They put framed prints of all of the artwork up in a semi circle, then sent the authors off to go find their piece.  I started at the left side of the circle and worked my way around methodically, determined to not embarrass or shame my artist by picking the wrong piece or failing to recognize mine.  Thirteen pieces of artwork.

Did I mention that the artists, as a whole, are much younger than the writers?  They are.  The why of that was one of the things I spent the week trying to figure out while digging into how the other side of the contest works.

I got to piece four or five and there was a world inside a bubble.  My story is set in a bubble universe.  It could have been mine, if the artist didn’t read the story very carefully.  It was a lovely piece, but the atmosphere was wrong, and the details didn’t have much to do with anything.  Probably not mine, move along.

When I say young, I mean that the night the artists arrived, a group of us writers pounced on them by the hotel pool.  Everybody was enthusiastic and friendly, but some of the artists seemed a little nervous and shy.  It felt a little like we’d loudly barged into freshman orientation – they were happy to have us there, but we didn’t fit and they weren’t sure what to do with us.

Piece eight had somebody on a bicycle leaving town.  My story has somebody who leaves town on a journey.  It’s possible that could be a badly rendered scene from my story.  Maybe?  I’m getting low on artwork.  Was it the one with the bubble after all?

Unlike the writers, the illustrator winners each quarter don’t get ranked.  They just have three winners per quarter, and all twelve winners go against each other for the grand prize.  Winning one of the illustrator quarters is basically just winning entry into the real competition, which is who does the best illustration for their story.  The artists get their assigned story, then have to deliver three thumbnail ideas.  One of those ideas gets greenlit, and they do the full workup of that one.

I get to artwork piece number eleven.  Nope, not mine.  And I’m getting worried.  Did I mention that the artists are adorable and I’d really rather not dash somebody’s dreams and ambitions?  Obviously one of the pieces I picked out as maybes were mine, and I’ll have to study the remaining two pieces as carefully as I have everything else so far, then beeline to one of them and claim I knew it the whole time, but wanted to take in all the artwork before announcing my discovery.  Which one, though?  Also, oh god, I am going to have to lie through my teeth about loving it and it being awesome and my tact wells are, at that point, completely drained.  But no way am I going to be the snotty writer who crushed the poor illustrator by huffily not appreciating the work that went into making a visual rendering of their vision so I just have to guess the right one and summon the resources I don’t have…

Then I see piece number twelve.  Glance a thirteen.  Look at twelve.  Glance at eleven.  Nope, twelve is still there.  Not going anywhere.  Not a hallucination.  Not a cruel prank designed to guarantee I make an ass of myself.  It’s really there.

HOLY FUCK MY ILLUSTRATION LOOKS LIKE THE COVER OF AN N.K. JEMISON NOVEL

“Uhm,” I say, looking around the room at the other people mistakenly milling around at other pieces when they clearly ought to be drooling right here, “If this isn’t the artwork for my story, I have a serious beef with the author of whatever story it is.”

Understatement of the year.

Bernardo is eighteen.  He was seventeen when he won.  He’s still in high school.  He is the best artist on the planet.

He was also adorably nervous about whether I’d like it.  The prints weren’t true to the digital colors and this bothered him so much he pulled out his tablet to show me what the colors should look like.  “I don’t know why they assigned me your story.  I’ve never done anything like that before,” Bernardo said.

Bernardo has put up with my undignified gushing remarkably well given that I’ve got a decade of “Knows how to behave better,” on him.  I may have interrupted a dinner conversation to give him my card and demand that he send me everything ever immediately.  It’s possible he’s afraid I’d fly to Portugal and hunt him down if he didn’t comply.  If so, he’s perceptive as well as talented.

But how could you not be enthusiastic?  He made a clay model for reference.  And he sent me his sketch sheet where he was working through ideas, just like the neat extras you get at the back of comic book collections sometimes, except this is about my story. 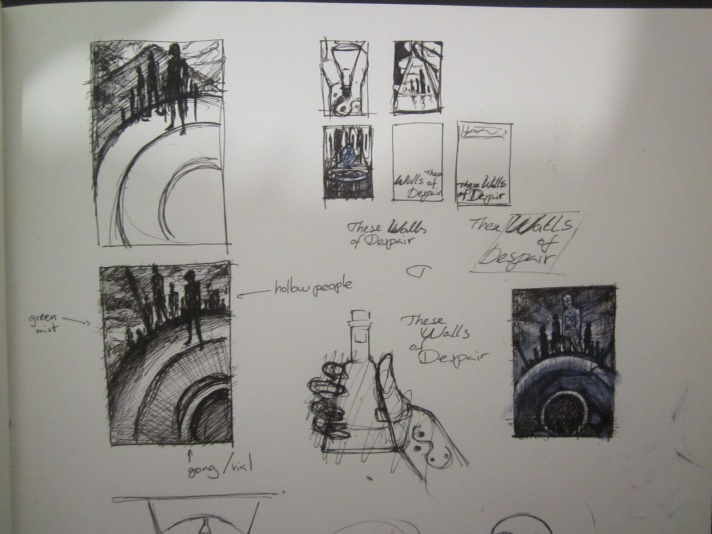 And the thumbnails that didn’t get selected as the piece for him to finish were full of good ideas.

I was in fantastically good hands with Bernardo, and had no idea until the reveal.That smile is fantastic, and a great detail for him to have picked up from the story to highlight. 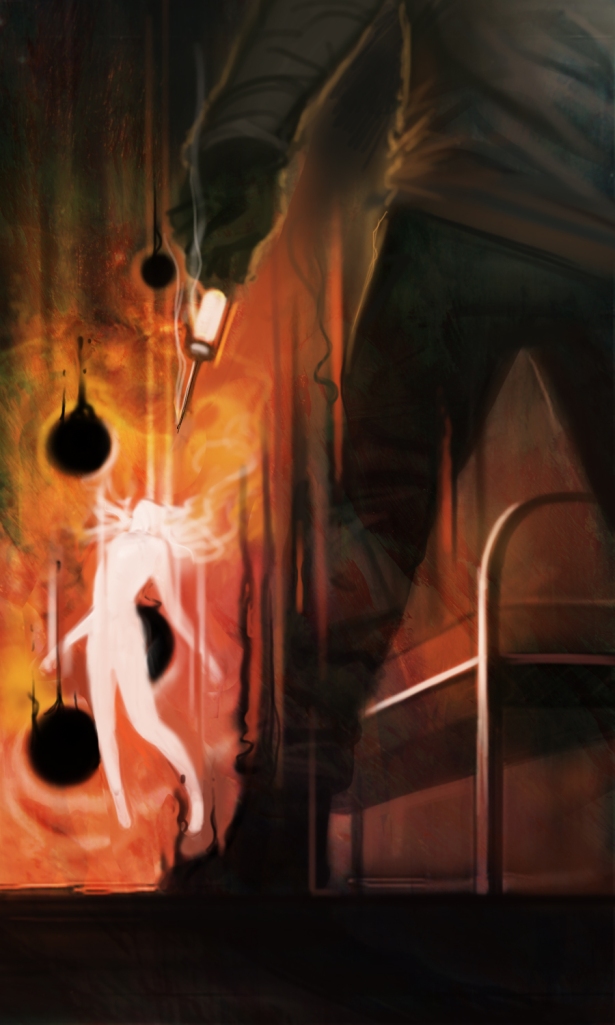 What I really like is that so much of the this story was about the aesthetic, the atmosphere, and he captured it throughout.  He got it.  This is awesome, because I totally am the writer who’d look at the art, pout, and then whine about how they didn’t get it. Hopefully, not where the artist can hear me do it, but yeah.  That was the day where I got to melt with genuine squee instead of pretending to.

Somebody give Bernardo a job.  He’s about to graduate from high school and I don’t want him to do something sensible like go into banking.