When I was in college, several of the cafes stocked a dish called mojadara.  It was a curried rice and lentil dish that was super filling and you could get for $1.50.  I’d scarf it up whenever I’d had a particularly profitable week at work or otherwise felt like I’d earned an exciting treat.  This was the dish that taught me the beauty of caramelized onions and golden raisins.  It’s simply, hearty, and fantastic.

I’ve never quite gotten it right, making it at home.  But I was thinking about it the other night when, in the middle of an excruciatingly stressful week, I decided to declare bankruptcy on my to do list and cook dinner.  I didn’t have lentils.  Or the time to do the pre-cooking rice soaking that I’ve gotten fond of when doing stir fry style dishes.  So I decided to fake it with couscous and chicken.

The first step, of course, is caramelizing the onions.  Getting this right is mostly a matter of not overheating the onions and being patient.  I tossed them into the skillet, then set to work making a marinade for the chicken. 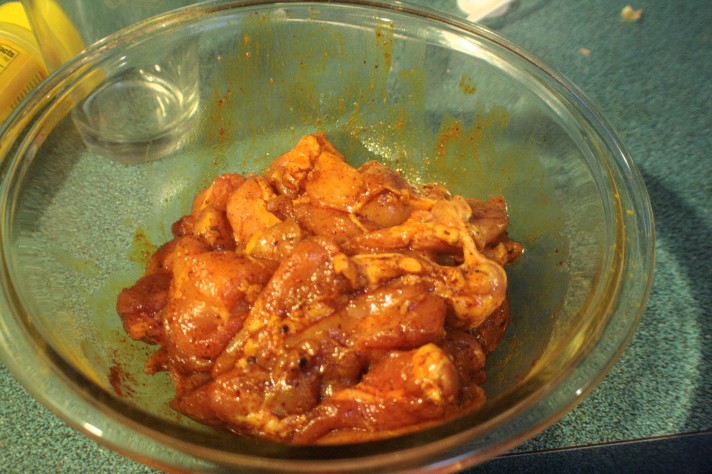 I used some yellow curry curry powder, olive oil, powdered sumac and a dash of salt in the marinade.  Then I dropped the chicken in to soak it up while the onions cooked.  Ideally I’d have done this the day before, but twenty minutes is enough to do something if that’s all you’ve got, and I was hungry.

Onions are very forgiving of fidgeting with them while your caramelize them which is good because I’m a fidgeter.  I had the heat a smidge high for these, so some of them got a bit crisp before they were ready, but it didn’t turn into a disaster and most of them had really good color when I was done. 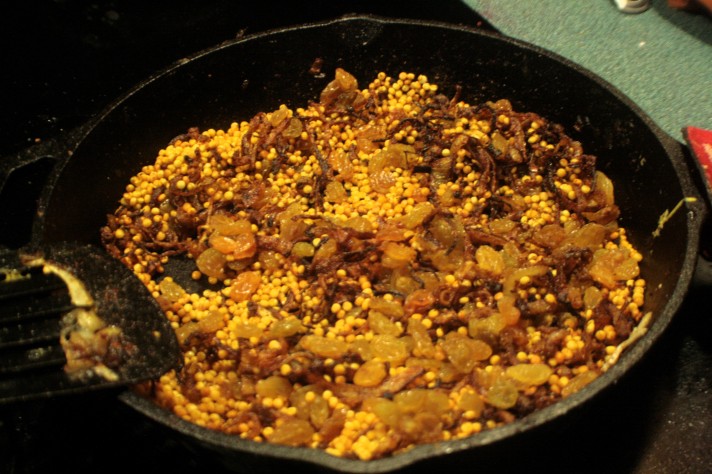 I tossed the couscous into the pan with the onions, then threw in a dab of butter, a pinch of salt, golden raisins, curry powder, and some water.  Frequently I’ll use chicken broth when I’m making couscous, but this was just for me and I was already seasoning it pretty heavily so I didn’t think I’d need the help.  I was right, though extra flavor is rarely a crime. 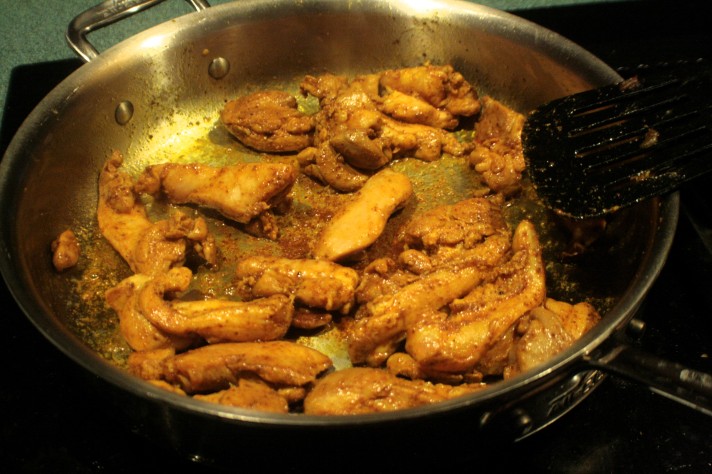 I let the chicken marinade while the couscous cooked, then tossed the chicken into a skillet once it was time to take the couscous off the heat and let it rest.  This wasn’t the strictly most efficient order of operations for preparing dinner, but it gave me enough down time to do the dishes, too, and I can pretty much only bring myself to do the dishes while cooking, so it’s better overall.

And then there was feasting.

Nobody would have identified this as a mojadara knock-off if I hadn’t told them, what with it having virtually nothing in common with the original dish, but it was tasty, and exactly what I needed for a chilly, rainy week full of frustrating nonsense.