The Grace of Kings and a Feline Terrorist

Back at the beginning of the month, a very cool book came out for your reading pleasure.  It’s this one.

Technically, I haven’t read it.  I read an early draft wherein my most notable contribution was to cuss at Ken Liu about pigeons.  This is, I’m not at all ashamed to say, probably the greatest of my literary achievements to date.  Someday I’ll be sitting in a job interview and when they ask me why they should give me the job I’ll say, “I once cussed at Ken Liu about pigeons.”  There will be a long moment of awed silence, and then they’ll ask me to write my own job description and employment contract.  This is a true thing that cannot be denied.

What else is a true thing that cannot be denied is that this book is really cool.  There’s not anything new in it, but some of the things he does are so old-school you might not have seen them before, and he mashes them together in a way that’s definitely new to you, and if you’re even a little bit bored of the same-old, same-old, this’ll be a breath of fresh air.  And even if you aren’t, it’s fun, which is enough reason to read anything right there on its own.  I can tell you all of this with authority, even though I haven’t read this version, because it was true of an earlier version.  Also, to make sure the fun and neat and general spiffy that was in the book didn’t vanish during subsequent revisions, I did science.

It is a well known fact of modern science that cats are the source of all things good, and also all knowledge, and also the center of the universe.  I just so happen to have had a cat nearby with whom I could perform a test on the copy of The Grace of Kings Ken sent me and which arrived over the weekend.  (Important takeaway: I have a signed copy of The Grace of Kings.  Do you have a signed copy of The Grace of Kings? No? Aren’t you just a sad panda.)  This cat’s name is Zoey.  She’s ancient, cranky, loud, smelly, clingy, demanding, and made of fur she sheds liberally absolutely everywhere.  She moonlights as a tiny dinosaur and hires herself out as a domestic terrorist.  In summary: yeah. She’s a cat.

Because I am a wise and sensitive human, I decided to interrupt her very important settee-nap (as opposed to her futon nap, her foot-of-the-bed nap, her head-of-the-bed nap or her Rolling-on-rug-to-embed-fur play session) in order to conduct my terribly important experiment.  Would Zoey certify that all good things remained in this book? Or, more importantly, would she consent to be photographed with the book so I could shamelessly manipulate people into associating it with internet-crazed-feline-obsession?

Zoey, it seems, expected that if I was going to disrupt her, I would be petting her, or playing with her, not trying to get her to pose with a book.  She’s a cat, not a marketing prop, her agitated pacing and squeaks seemed to indicate.  Or possibly they were saying, “Oooh, the boring human came out of her office to acknowledge me. I must vex and frustrate her to make sure this will happen again.”  The day I claim to understand the inner workings of a cat’s mind is that day I’ve started my cult. 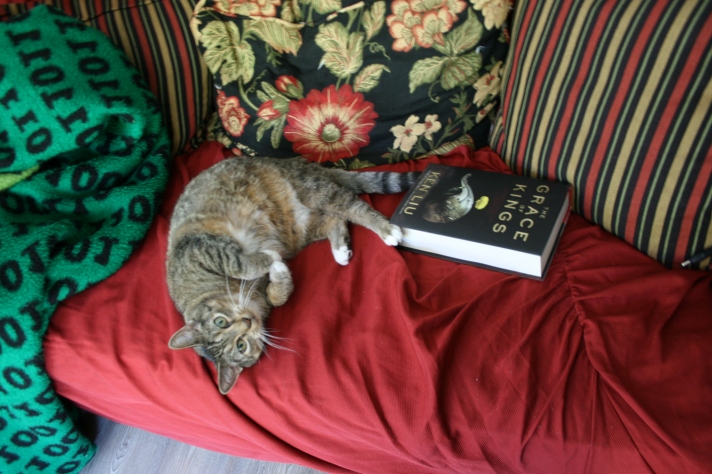 This is clearly a case of “This object is not offensive enough to drive me from the sunny settee. Now scritch me, human!”  See how her paw consents to brush the corner of the book.  That’s a mild endorsement of its contents if ever I saw one.

That, good people, is how to scientifically obtain an endorsement from your local feline.

So when you see this book in the store you need think only one thing: The Grace of Kings – Anaea tested, cat approved.