I generally spend Fridays paying penance for not getting enough sleep while working Monday-Thursday.  The penance usually comes in the form of feeling hung over and stupid all day.  Last Friday was a little bit different.

During my zombie portions  of the day, I  did what any incoherent individual of my generation would do – I surfed the net.  Here are links to fun things you might want to check out.  Not all of them existed on Friday.

1) The runaway senators are not on a beach.

2) Wisconsinites like beer, cheese and football.  That’s why, actually, they’d rather not be all grumpy.

4) The cops thanked us for no arrests.

5) In case you didn’t believe me when I said Scott Walker hates Madison, no really.

Anyway, brain-cravings aside, I had work I had to do during the day Friday, and by all accounts there were plenty of people at the Capitol during the day, so I figured I’d pay my dues Friday night when everybody else had gone home or gone out drinking.  I got together with some friends and we made some signs.  I failed to turn any of the fabulous puns percolating in my brain into anything witty and coherent.  (Anybody accusing me of coming up with the football-oriented punny sign we carried will be glared at for speaking unpleasant truths)  I opted for a slightly lame “Unions are our traditional values,” as my sign of choice.

We cut a late dinner at the Five Guys on State street short to run over to the Capitol when the punctual members of our group sent texts that they would be closing the Capitol in half an hour if they didn’t get more people there to testify.  In addition to our signs we schlepped along everything geeks need to express political wrath all night long: Two kinds of cheese, two kinds of crackers, summer sausage, chocolate covered almonds, Cheetos, bottles of water, sleeping bags, blankets, pillows, a deck of cards and a copy of Ticket to Ride.

The objective, linear blow-by-blow for the evening can be found here.  I’m going to ramble and muse a bit here rather than rehash something I’ve already said. 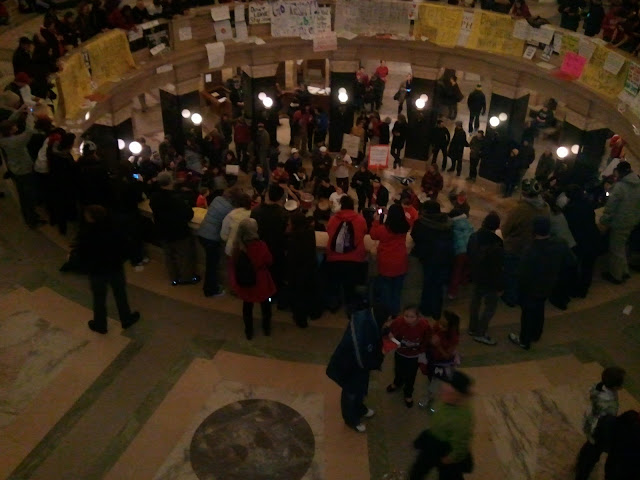 The first thing to strike me when we walked into the Capitol were the signs posted on the walls.  It was weirdly reminiscent of the signs stuck on the elementary schools where I go to vote, down to me being surprised at how much was in Spanish.  There were a couple “Trabajadores unidos” and “Si, se peude,” mixed in with the rest of the signs.  To somebody who moved here from the South side of Chicago and who still hasn’t quite adjusted to how overwhelmingly white Wisconsin is, it’s always neat when I run into Spanish unexpectedly.

The second thing I noticed was that everybody was wearing red.  This was fairly clear from photos of the protest before then, but even at 9:30pm several days in, there was still a ton of red in the crowd.  I’m not sure the national and international news carrying pictures of the protests quite get it.  Sure, red is the color of commie socialist liberal union pansy creeps everywhere.  But mobs gather in Wisconsin clad in bright red all the time.  It’s part of this social ritual they have called football, wherein grown men wear a lot of padding, chase an ovular thing along a field, and the people watching behave as if the fate of the free world depending on how well they chase that ball.  The variety played in Wisconsin involves the official sacrifice of a badger for each game, while chanting about Brett Favre.  So when people in Wisconsin gather in mobs, they must wear red.  There’s a clause mandating it in the state constitution, and they have mind control drugs in the beer to ensure compliance.  If this accidentally influences the politics espoused by the mobs in Madison when they gather, well, come on, football.  It matters. 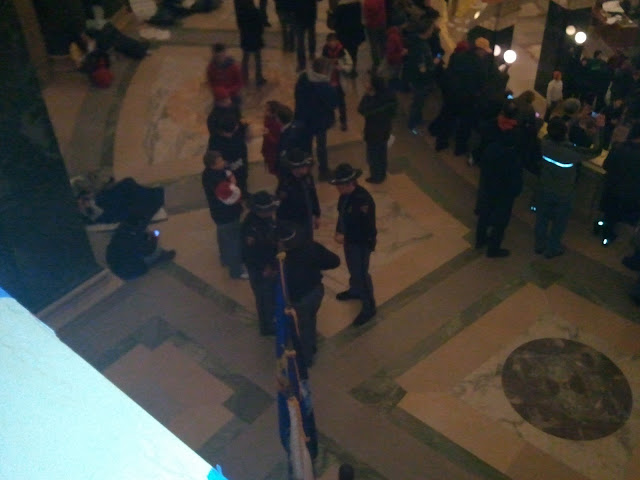 More seriously, Scott Walker and his ilk lost a lot when they let the protestors co-opt red as their color.  I’m not sure how right-wing conservatives could have grabbed it as their banner instead, what with the historical political associations, but giving it up ceded the home turf to the other side.  And yes, I pondered that while trying to figure out what on earth the guy with the megaphone was saying. 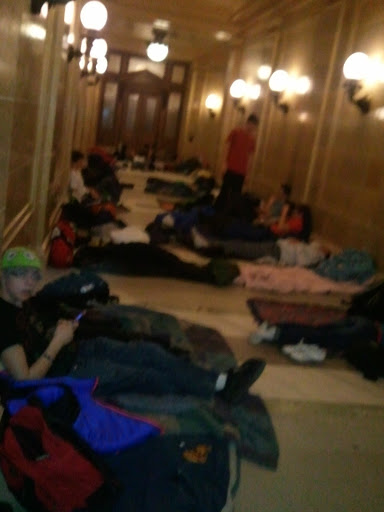 As we set up our camp site on the third floor of the Capitol the other thing that struck me was how genuinely neat it is that we could do that.  I took a tour through the Capitol last year and they mentioned that the public can reserve conference rooms any time during business hours for free, for any use, and for a small fee to pay the security guard at other times.  “How quaint and small-towny of them,” I thought to myself at the time.  I mean, I’ve lived in D.C. and worked in the national Capitol.   Even as an employee who had to be on the floor of the house by 8am every day, there were hoops to jump through.  Random Joe Citizen wanting to use the public space he paid for with his taxes is absurd from that point of view.  Looking at the scenario again, at 1am on a Saturday morning, the local notion doesn’t seem so quaint.  I pay a lot in income taxes.  I pay a lot more in property taxes.  And then there are the sales taxes, and I rack up a lot of that too.  That unoriginal domed structure in the middle of Madison is my Capitol, and if I’m pissed off and want to take it over on a Friday night, well, I should.  The same thing could never happen in D.C., and I think that’s very, very sad. 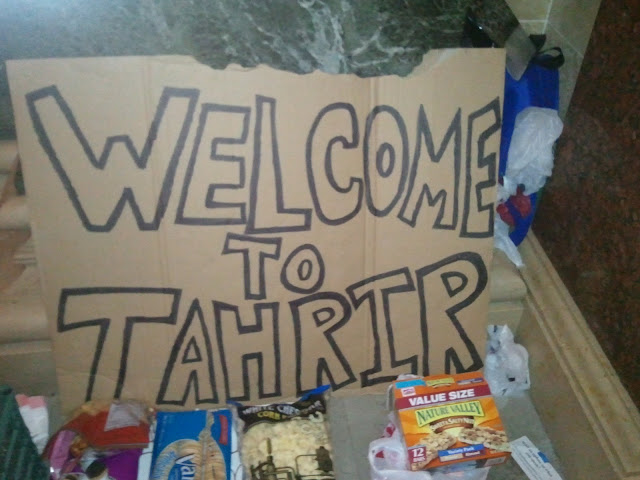 To be continued, with pictures off a real camera…