I mentioned Cold  Weather Hippies earlier.  One of the benefits of living with cold weather hippies nearby is that they’re big believers in farmer’s markets.  For somebody who grew up buying corn off the side of the road from the Amish families who grew it, this is like the one good part of growing up in ruralia, put on crack and delivered to your urban doorstep.  During the summer, there are several farmer’s markets all around Madison, but the farmer’s Market happens on Saturdays, on the square around the capitol.  The stretches of space to either side of the sidewalks are completely overtaken by vendors, and the sidewalks are packed with people out for their fix of  locally grown / organic / artisan / phenomenally tasty food.  This isn’t just fresh strawberries and heirloom tomatoes – we’re talking aged cheese, slabs of beef, jellies, spreads, flowers…everything.  I take out of towners to the Farmer’s market  because after one loop around the square (which can take over an hour) I don’t have to explain Madison anymore, they get it. 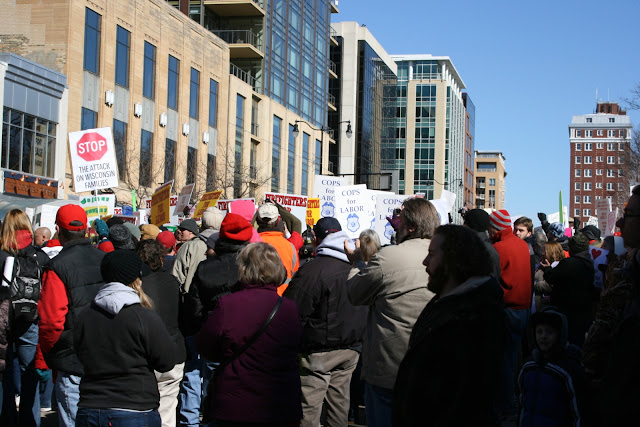 Saturday looked nothing like a farmer’s market Saturday.  There were that many people there, but the lack of vendors meant there was more room to move.  Firefighters don’t march up the street, with cops waving signs indicating that, hey, they’re throwing in against the bill too.  I don’t bump into somebody I’ve never met before but who’s carrying a sign that says, “Unions are our Family Values,” in my handwriting.  And on Farmer’s Market Saturdays, absolutely nobody gets to the square, pouts, and goes, “But I thought the Tea Party was going to be here.  Where are they?” 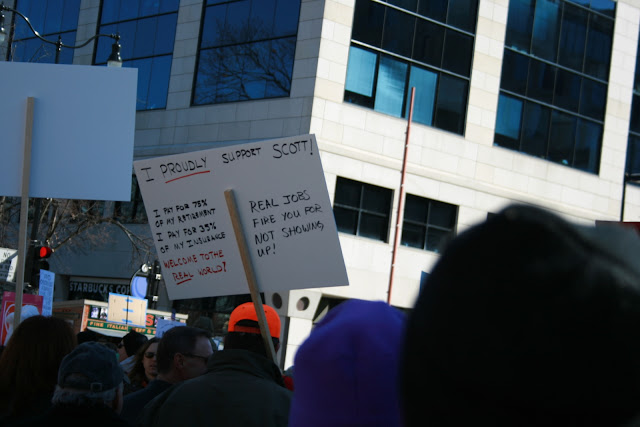 I have a lot to say about me and the Tea Party, but that’s going elsewhere.  Suffice to say, I got to the square, took a moment to boggle, and then started hunting for this big deal rally that was going to show the spoiled public union people how real life works.

If you don’t know what the Capitol looks like, or what I’m talking about when I talk about the square, do yourself a favor and go look.  Now picture the square as a pie, divided into eight slices.  The Tea Party fit into one of them.  By the time I got to the corner where they were having the rally, I’d started to wonder whether they were there at all, or they’d had to relocate because there wasn’t room for them.  I just marched along with the people chanting, “Show me what Democracy looks like!” until all of a sudden there  were Scott Walker for President signs. 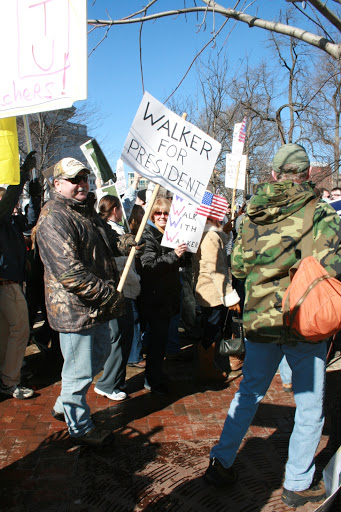 Let’s pause for a moment here.  Scott Walker.  For President.  Placed un-ironically on a sign.  Oh yes, I found the Tea Party.

I did the only possible thing to do and pretended I didn’t see any of the signs supporting Scott Walker personally.  Remember, my feelings about unions in the abstract are nebulous and fuzzy though slanted toward support, but my feelings on this particular piece of legislation, the way it has been handled, and the guy pushing it are best summed up as “Scott Walker is a child,” and letting the audience reflect on my opinions of children.

I’m going to copy a bit from what I put up on the FrumForum, because this was the biggest moment for me that day.

I worked my way around to the Northern side of the protest where there was a guy with one of the “Sorry I’m late,” signs. I had a brief conversation with him:

Me: Hi, can I ask you a couple questions?

Me: Where are you from?

Me: How much do you normally work in a week?

Me: And do you normally work on weekends.

Guy: Some.  I took the day off to come here today.

Me: Do you know why there are weekends where you can find the time to come out and protest.

Guy: I suppose you’re going to tell me something about unions in the 20s and 30s?

Me: It is a matter of historical record.

Guy’s daughter (?): Yeah, because you had anything to do with that.  You look good for your age.

I suppose I could have kept trying to engage, the two sides really are at the point where they’re talking past each other due to differently sorted priorities and laying that out to discuss might have accomplished something, but the daughter’s comment threw me.  I’m used to getting that kind of deliberately obtuse communication response from Delta customer service reps who don’t want to comp a hotel because they’ve stranded me in Detroit, but I don’t normally run into it in real interactions.

The idea that their quibble is just with the people in unions right now, today, and not with the historical fact of unions, is hard for me to grasp in the time it takes to continue the conversation.  The people in the unions right now have been sitting at the negotiating table going, “We’re ready to bend over, how much do you need?” the  whole time.  This situation exists because Scott Walker decided to light the table on fire.  If the argument isn’t that the fact of the unions, which are how we got the idea of weekends, of the 40 hour work week he was so pleased to surpass, and the foundations for the benefits at the heart of the problem here, what is the problem?  I can make hating unions make sense.  I can wrap my head around being smug at finding a way to get rid of a pariah you don’t want to deal with.  But if, when you’re defining the borders of your pariah, it will be defined so as to only apply to the current generation of Union members (of which, granted, I am not), there’s no fight here. 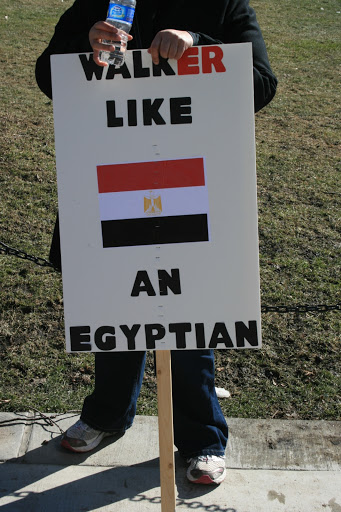 Obviously they aren’t thinking that way.  There’s some sort of double-think wherein current unions must take the blame for the alleged historical wrongs without getting credit for the benefits.  They’re saying that all the good a union can do has been done, those accomplishments are everlasting, and they must be shucked before their flaws, which have not yet peaked, can overrun us.  Except, this guy works 55 hours a week, not 40.  The recession destroyed what remained of most illusions about job security.  Pensions barely exist anymore, leaving people at the mercies of social security and the stock market for their retirement.  We’re already short  of the peak of union good. That last bit, I suspect, is the answer to it.  Very, very few people are in unions anymore, and a significant portion of the unions out there are toothless yes men who do little more than hire you a lawyer for wrongful termination, if it comes to that.  But people know the union dream, and when they see people standing by their unions, they’re going, “Look over there; those people have that dream, while I’m this sad working sod out in the real world.”  They’re angry at the unions for the same reasons I feel fuzzy about them: They aren’t working, life for labor sucks.

That, I can understand.  Not well enough to fathom wanting Scott Walker to be president, but I get it.  The only thing worse than being miserable is being surrounded by broken promises of something better. 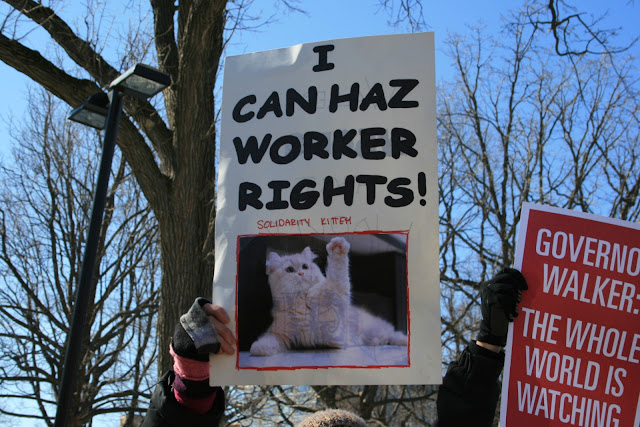