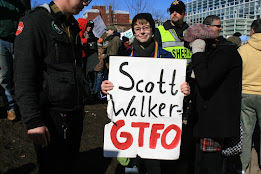 Almost exactly ten months ago, I put up a list of goals I had for the whole protest/recall/Wisconsin is screwed movement.

The budget got passed, so I missed the first goal.  We got six recall elections but didn’t win all of them, so I vaguely missed that goal, too.  There are several things I could point at as potential Anti-Tea Party things, so I’ll call that goal in progress with likely success.  The fight access to the capitol continues, and there’s a whole clutch of people who make a point of waging it, so I have definitely nailed the last goal.

Which leaves us with the second goal; getting rid of Scott Walker.  (Public flogging on the square is still acceptable to me)  The project to recall the governor has changed my plans, everything from when/where I go on vacation to which jobs I’m willing to take.  And bitches, I’m winning that fight.  Over one million signatures when just over half that were required.

You’ll hear stories about fake names, duplicate signatures, and that they’re all from the deluded hippie land that is Dane county.  These stories are not true.  There are going to be lawsuits, and primaries and Republicans screaming about out of state paid workers and out of state money while they’re fundraising in Texas, and at the end of the day what matters is this: One.  Million.  Signatures.

Maybe instead of bookshelves, my next carpentry project could be a stockade.