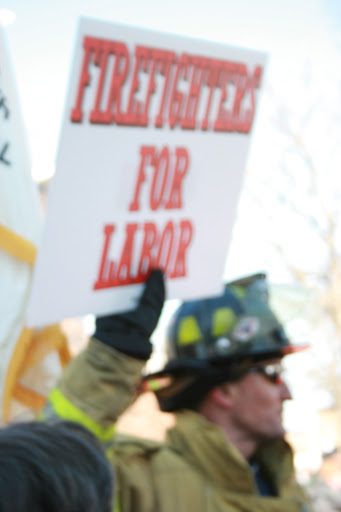 I did not go to the Capitol on Sunday.  The pictures in this entry are from Saturday.  On Sunday it rained, except when it was snowing, or sleeting, or that stretch where we had thunder.  I spent over an hour on the phone dealing with airlines, and I’d been running through the weekend as if I were well rested starting out, not as if I normally spend Friday in a coma recovering from M-Th.  Sunday I sat around, and I talked to people. 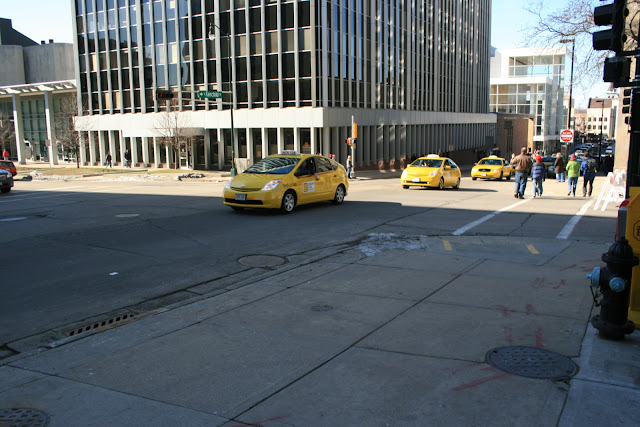 On Thursday, February 18th, fourteen minority state senators had a problem.  They were expected to walk into a session and accept it while the majority pushed through a corrupt, unethical piece of legislation that violated principles held sacred by their constituents.  The minority senators gathered together, discussed it among themselves, and decided to do something radical; they fled.

“Nobody knows where they are,” the Cabbie who drove me home from the airport told us on Thursday night.  “But we have reciprocity with most of the midwest.  If they say where they are, they could be arrested.” This was the moment I fell in love with the protests.  It is likely that when I look back on this years from now, it’ll be pinpointed as the moment I fell in love with Madison. 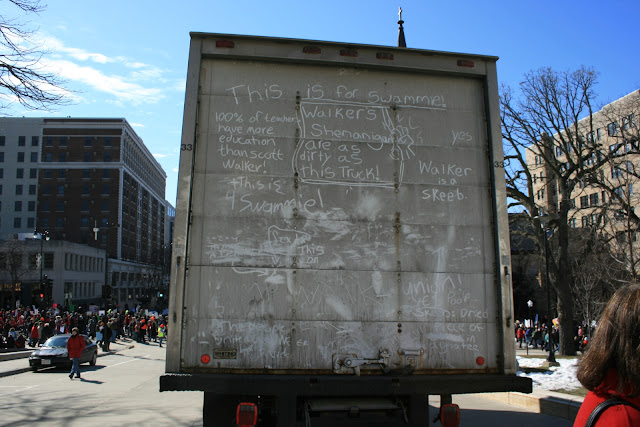 “Yeah, we should worry that it’ll only take them a year and a half to fire somebody instead of two years,” Pappa said when I called him on the phone.

“Are you kidding me?  Even if you think union busting is a good idea, doing it this way is not okay!  I don’t care what you think about the goals, you should be with me over the process.”

“You’re so easy,” he said.  “Be careful with the rubber bullets.”

“Ha!  The cops are marching with us.” 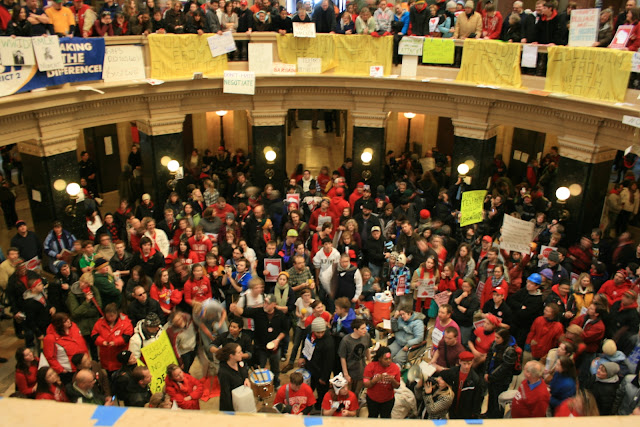 I have a few friends who still work for the software company that brought me to Madison.  Not many, most of them have left, fleeing back to school or to blue collar work rather than remain in the industry at all.  Back in the early days when the company started chiseling away at our social circle, randomly firing people without notice or making such unreasonable demands that even the competent, work-aholics among us got fed up and left, I mentioned that if we were really invested in the company, if we wanted it to succeed, we should form a union.  Turnover and knowledge loss is slowly choking that place, and the management ignores the problem and keeps on making it worse.  “People who say the word ‘union’ get fired,” was always the response.  I didn’t love that company, so it wasn’t worth the work, the risk that they’d blacklist me when I switched to customer side consulting, so I left them to rot.  Hopefully they won’t implode before I’ve had my fill of covering their failings on the customer side.

Sunday night I saw one of the friends who is still there, despite getting hired for one position with the utterly broken promise that after a year he could move into the job he wanted.  I don’t talk politics with him very often.  He doesn’t vote, which grates me, and from what little we’ve talked about, his boundaries for civil liberties are too narrow for me by several orders of magnitude.  He said two things that stuck with me: “Things get tacked onto little bills all the time.  But yeah, this was too big.”  And then about work, “Unions are usually a problem.  But how can you ask people to work that much and expect to maintain quality? A Union might help.” 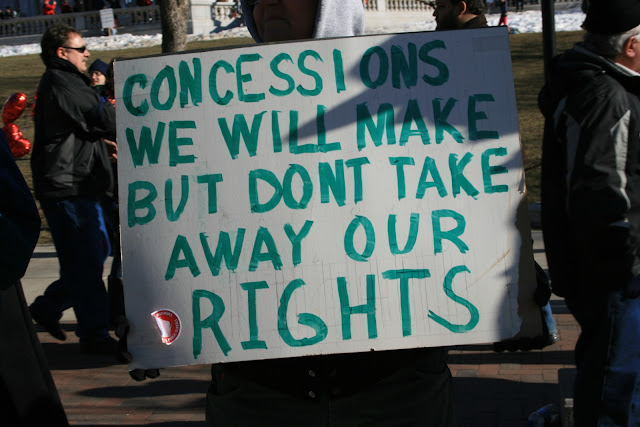 My grandfather, who unironically sports a pro-Sara Palin bumper sticker, and my nearly a-political, authoritarian leaning buddy, don’t think I’m crazy.  They might tease, but they support.  I could take over the world with that.

“Have you been following the news about the protests?” I asked my sister when I talked to her.  (Happy birthday again, btw!)

“Not really.  Mom and Dad mentioned something.”

“It’s awesome.  They’re picking up their trash.  They aren’t walking on the grass.  There’ve been remarkably few Hitler references.  This is so much better than the protests when I lived in D.C.” 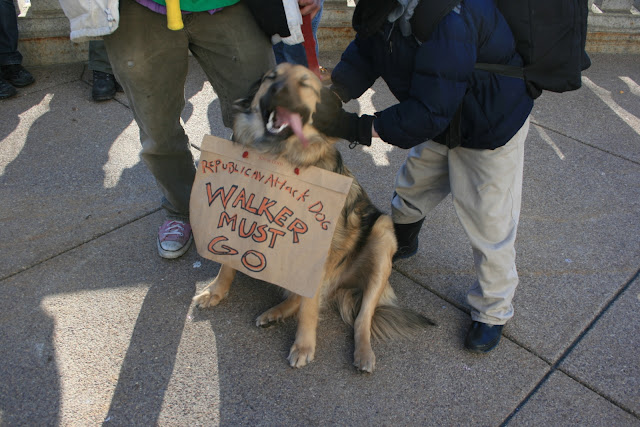 On Saturday, the corner opposite of the Tea Party rally had speakers set up to play protest songs.  This setup faced State street, pointing toward the University.  The first time I passed by after they started, they were playing Revolution 1, the White Album Version of the appropriate Beatles tune.  They followed it up with Get Up, Stand Up.  I hung around there for fifteen minutes.  By the time they were playing songs from my generation, they weren’t on message anymore.  We’ve had two wars, the patriot act has been passed, and then renewed, the FISA bill went through, the FCA ran Howard Stern off the public airwaves, the TSA has gotten terrifying even to people who aren’t me, and we have no mainstream protest music for our generation.  I can think of a lot of political and appropriate rap, but being rap, it doesn’t work as well for the circumstances.  So we fall back to the sixties.  Has nobody been pissed since then?  I know that’s not true.  Where’s the music?

On Sunday, we knew the “Fab 14” were in northern Illinois and planning to stay for the duration.  They’d been gone for three days, and the news had become international.  I got write-ups from the events published by a place with an actual editor.  (First publication credit, huzzah!) And I stayed home to rest my feet and talk to people.

“You know, there are protests here in Madison,” I said to Grannie when I called her.

“I’m having fun.  I spent most of Friday night in the Capitol, and yesterday.  I’m going back tomorrow.”

“Oh.  Well, I’m getting ready for my birthday party.” And we talked about weddings and babies and funerals, like we do every week when we call.  She’s an almost 90 year-old woman living alone in Richmond, VA.  They’re a right to work state.  I’m okay with that.  I’m not a believer in making adults do things for their own good.  People who have to pay dues to a Union they don’t believe in just resent the Union.  We have to make the case, explain what a Union ought to be, show why they aren’t working that way. 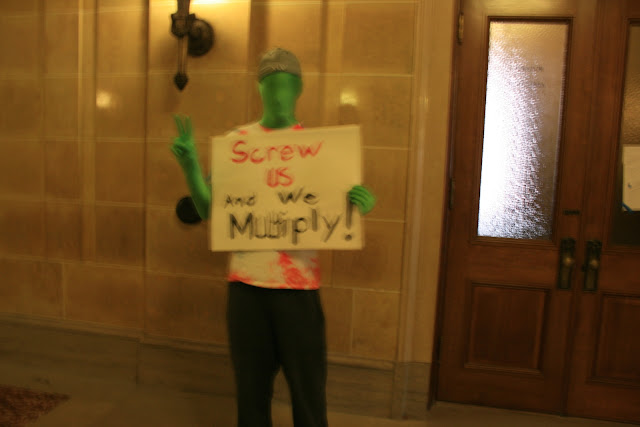 We have to talk to people.