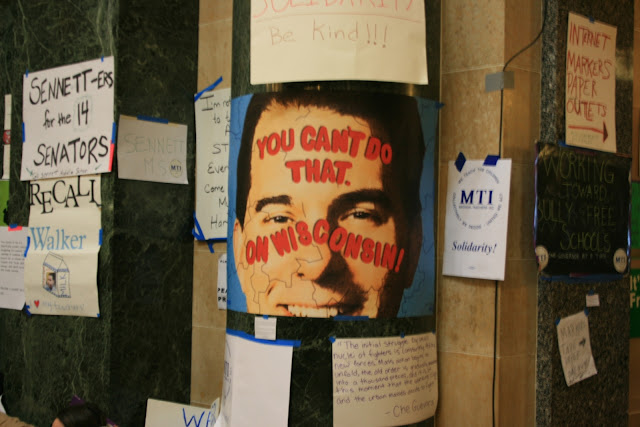 It might be because it was the first time I got there in the afternoon on a workday, but I don’t think so.  The content of the protest seemed to have gotten both more global, and more specific.  There were people picketing M&I Bank because they contributed to Scott Walker’s campaign.  But there were also more signs about universal principles, Capitalism being the problem, the need for a socialist or communist or worker’s revolution.  I have a lot of opinions on that, but they’re a distraction and will come later, if ever. 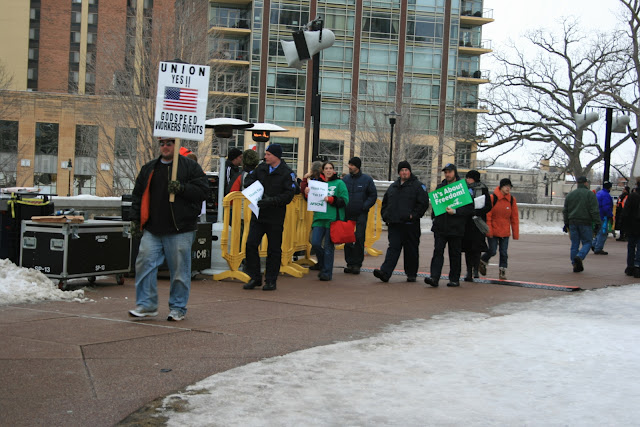 “Hey, can I talk to you for a second?  Yeah, you.  Do you know Keynesian economics?  It’s the economic theory that has been proven to work.  It started back with FDR…”

People were standing around and talking.  A lot of the conversation was facile, platitudes from one believer to  another, but some of it was truly fantastic ranting.  The guy quoted above stopped two picketers and started going at a mile a minute.  I stopped to listen for a while – he’d been so fervent when he stared I thought he might be a stray Tea Partier trying to convert his elders – but then I went on.  When I came back by, after circling the square once, then desperately buying a fresh battery for my camera (stupid cold draining batteries), he was still going, though he’d gotten up to Reagan and how that was where everything went wrong. 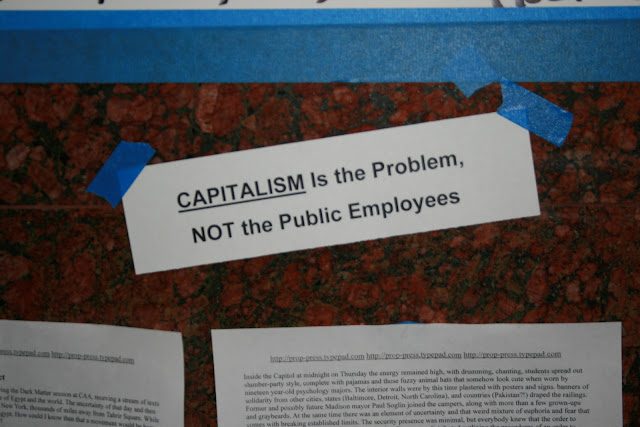 And there were rumors.  Great, juicy rumors, about the Teamsters striking and how all food delivery in Wisconsin would be brought to a halt.  I don’t believe these rumors, not yet, but I am taking time out today for a jaunt to Costco.  We could wait a few weeks, but it doesn’t hurt to be cautious. 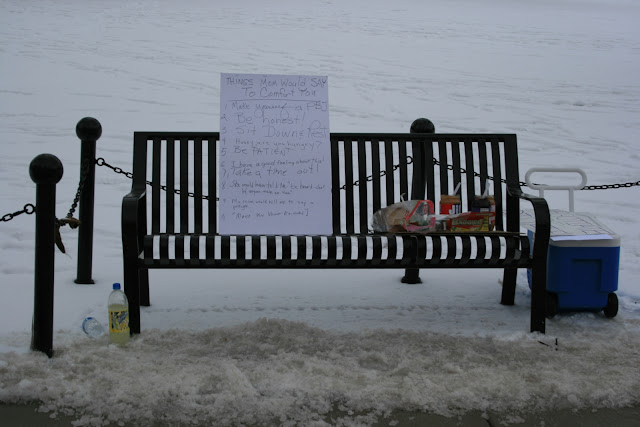 Food.  There was food everywhere.  Strawberries, apples, a million kinds of pizza.  Cases of water and soda.  Tubs of hand sanitizer.  Notices, “This is donated food.  Do not waste.  Take only what you need.” 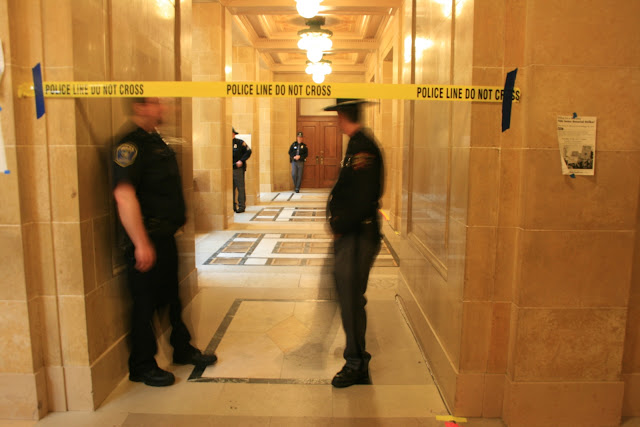 On Monday, Scott Walker gave a press conference wherein he said, effectively, “I don’t know what your problem is.  Get back over here and take your beatings.”  No really, that was the entire subtext of the whole thing.  I had this moment where I flashed back to the speech Mubarak gave when he announced that he wasn’t leaving office, but he would turn control over to the newly appointed Vice President.  I had been terrified that the Egyptian protesters would accept that token concession and go home, and they didn’t and that was awesome.  I must not have been the only one, because on Tuesday, everybody seemed determined in a, “I’m here for the long haul,” sort of way. 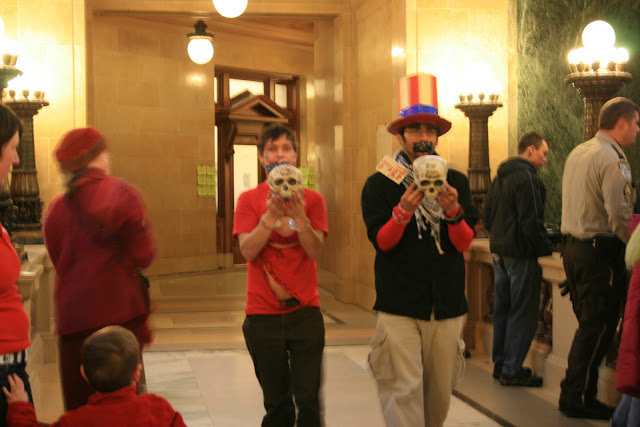 I lost count of how many people asked me to sign petitions.  What impressed me wasn’t just how organized they were, or how many of them there were, but that every time they started it with, “Have you already signed….?” It’s a little thing, but it makes a big difference, not just in making sure they don’t get repeat signatures, but in making sure they don’t waste their time. 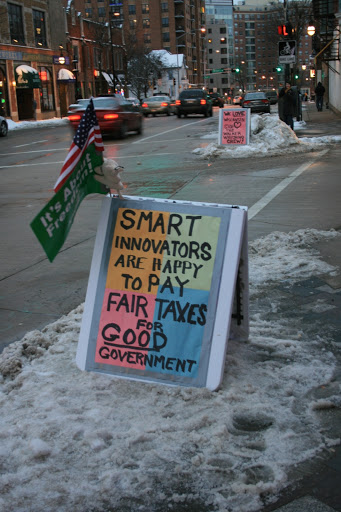 I walked down State street from the Capitol. In  Madison, State street is a pedestrian-only street leading from the Capitol to the UW Campus.  It’s wide enough for vehicle traffic, police cars and buses go up it, but except at the cross streets, pedestrians get free reign.  There are lots of little shops and restaurants.  And there are  lots of pro-protest signs. 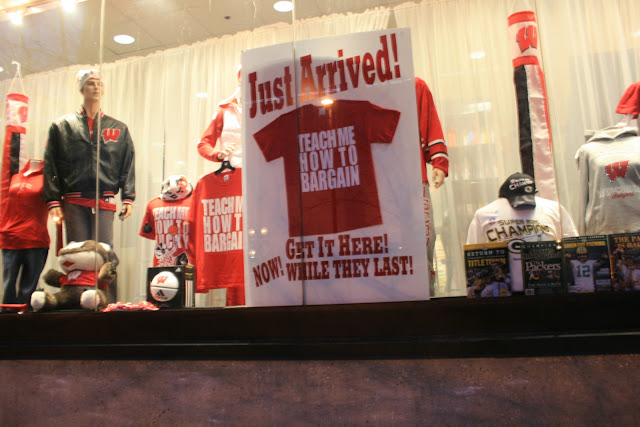 My favorite part came just before 5pm.  I mentioned before that I’d been on one of the free tours through the Capitol a year or so ago.  On Tuesday, I noticed the lady who leads the tours hanging out behind the desk.  She was distributing marble-friendly tape and arranging signs around the desk, looking for all the world as if having thousands of people stomping and chanting were normal.

“Are you still giving free tours?” I asked.

“The last tour has left for the day,” she said.

“But you’ve been giving tours?”

“Well, most of our groups have canceled, naturally, but if somebody wanted a tour, sure, we’d give them one.” 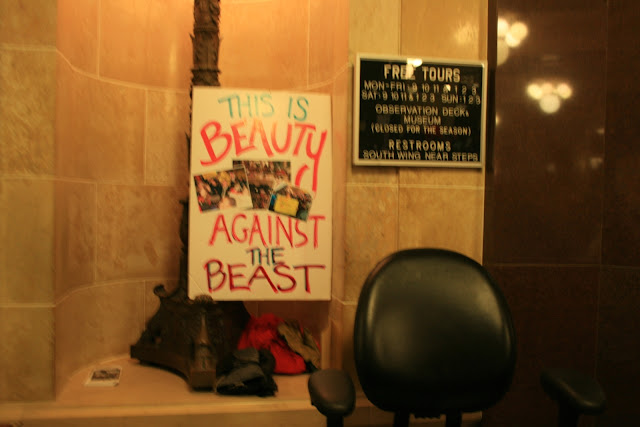 There is only one correct emotional response to that: ❤