Sometimes, after making a tasty dinner (first grilling episode of the year!), you’re feeling greedy.  It’s not that you didn’t get enough food.  You just need something else.  Something sweet.  Something chocolate.  And in this case, something pudding.

I’ve mentioned here before my general fondness for Bruce Weinstein’s Ultimate Recipe cookbook.  I poked at several cookbooks, and briefly flirted with doing pots d’creme or chocolate souffles instead.  But no.  I wanted pudding.  Largely because it was the easiest way to double the recipe and hold some back for Sunday’s crit group meeting.  Yay, planning ahead!

Since I was doubling the recipe, and since we had packets of chocolate meant for hot chocolate lying around, I got a bit creative with my choice in chocolate.  For half the chocolate I used chipotle hot chocolate, then went for standard unsweetened baking chocolate for the other half.

The really nice thing about doing a pudding instead of the other gloup-y chocolate options is that it’s unpretentious and easy.  You have to beat the egg yolks seperately, and since mine started frozen that took a bit of patience, but other than that, it’s really all about throwing things into a pot and whisking until you have pudding. 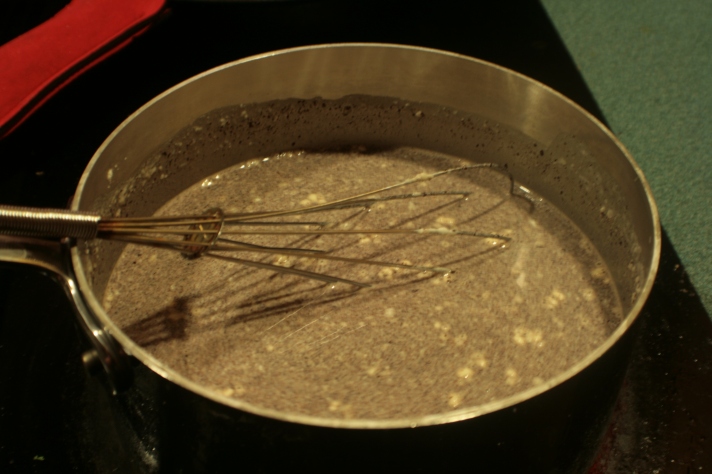 This is what everything but the yolks looks like when you’ve been whisking for a few minutes.  Most unappetizing hot chocolate ever, yes?  That’s okay.  Keep whisking. 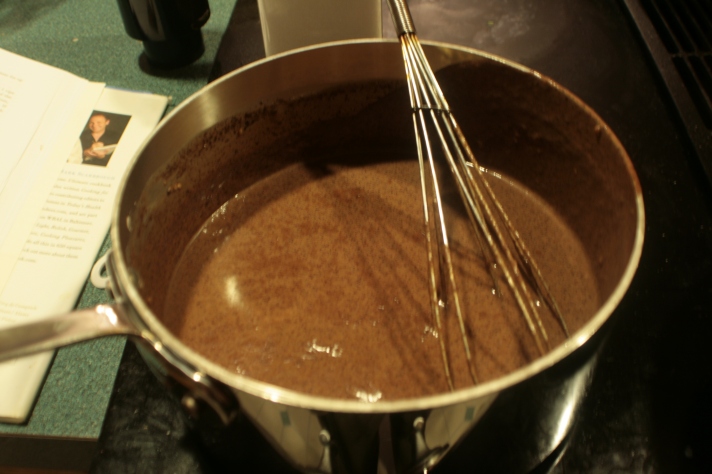 Mmmm, better.  This is the “let bubble and thicken for 30 seconds,” stage.  Which means it’s time to pour our hot pre-pudding mixture into the egg yolks so they get cooked.

And here’s what the yolks look like with half the chocolate mixture whisked in.  I found the logistics of pouring a “Slow, steady stream,” from the pan into the bowl a bit challenging.  I’d recommend either having another set of hands nearby, or using a pan with a spout.  Or being a ninja.  Ninja skills would be super useful for this. 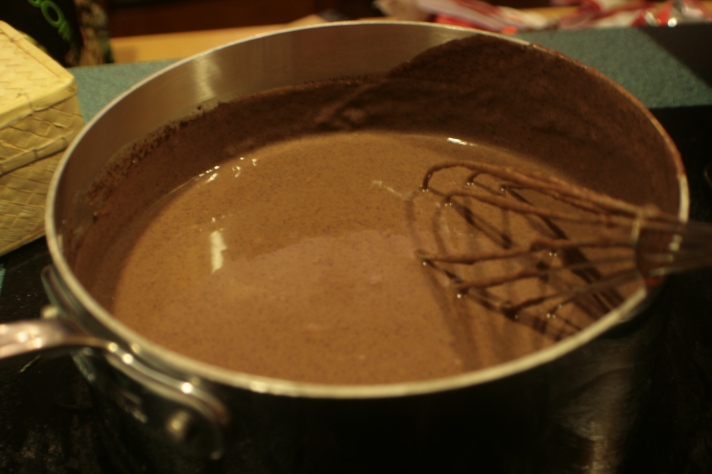 Everything goes back into the pot for more…if you guessed whisking, you win!  The book said to do it on low for about three minutes, at which point it would be bubbling.  After five minutes it was not bubbling, so I started cranking the heat, and did that slowly until it was bubbling.  Then I let it go a touch longer, just in case.

Unrelated note: glass top electric stoves are about the worst stoves ever invented.  They’re very pretty and sleek looking.  They’re also crap at evenly heating all but the perfectest of perfect pots, and a serious pain in the ass to keep shiny.  Do not buy stoves because they are pretty.  Buy them because they’re useful stoves.  (This one came with the house.)

That is the bowl of chocolate pudding I’ll be serving on Sunday.  The rest when into a different, less pretty container for consumption in the mean time.

And since everything else went so smoothly, gremlins intervened as I was pouring pudding into serving containers, and this was the result.  It’s very Jackson Pollack, if I do say so myself.