If you want to know a fun answer to give when people ask what you’re making for x event, let me tell you, “Eclairs,” is a great one.  I was having fun with this recipe pretty much the minute I decided to make it.  And, it didn’t shaft me too badly, so that was awesome!

The first step was to make the pâte à choux for the eclair shells.  This involved helpful instructions like listing “a pint of eggs” in the ingredients and then, “add as many of the eggs as the dough will hold.”  I wound up using nine eggs.  Then I left the dough in the fridge until the day I was actually going to make the eclairs, since I didn’t want stale shells.

You may have heard about the uncharacteristically hot weather we’ve been having in Madison.  There are a great many things on the list of things you do not want to do when it’s so hot your air conditioner literally cannot cool the house faster than the weather heats it.  Top on them is “turn on your oven before inviting over a crowd of people.”  But I’m really, really smart, so guess what I did?

We actually had the exact right tip prescribed in the recipe for piping out the shells.  Now, piping out 72 eclair shells is not exactly what I’d describe as a thrilling way to spend your morning, so I get a little creative with some of the piping, doing all sorts of swirling instead of just piping out a fat puffy ribbon.  Don’t do that; the creative ones were much harder to work with and tended to fall apart.  Also, 72 is a lot.  Even if you’re throwing a party, you can probably get away with a half recipe.

Since I had leftover apricot jam in the fridge, I actually glazed the tops to keep them from getting soggy.  I skipped making the chocolate glaze.  This may have diminished some of the potential awesome of the final product, but it saved me about two hours of time and a whole lot of tedium.  Nobody noticed, so I call that a win. 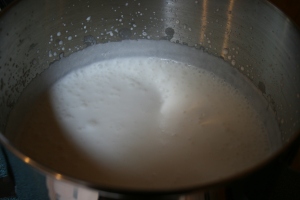 I made the chocolate cream for the filling the night before.  This was a bit of a different process from what I’m used to with any of the other creams in this book, or my general whipped cream and mousse knowledge.  It involved whipping the cream “until thickened.”  Soft peaks I know.  Stiff peaks I know.  “Thickened” was new for me.  I decided it looked like that.

Then came folding the chocolate into a portion of the cream.

After I mixed the chocolate portion into the rest of it, I made the executive decision that it was way too runny and put it back under the whisk to turn into something more like cream and less like soup.  Final product:

This was a pretty tasty cream.  It’s light, not too sweet, and not too chocolate-y.  I’d actually find it handy for filling cakes at some future date.

Then came the part where the recipe kinda screwed me.  It called for “smooth” strawberry jelly in a #5 tip followed by the chocolate cream from a #6 tip.  I had neither of those tips, and opted to use the smooth cherry jelly we had in the fridge rather than buy Yet Another Jar of Jam™.  It gave me the width of the tips, though, so I surveyed the tips I did have and picked the closest I had, which were slightly larger.

The jam needed to be smooth to prevent the chunky bits from clogging your tip while you’re trying to pipe.  The way, say, an errant bit of cherry skin did on the first tip I tried.  And the second.

Can I take a moment to plug the little rings you can put on your pastry bags that make switching out tips easy?  I think I just did.

I’m pretty sure I wound up with a lot more jam on the bottom of the eclairs than the recipe meant for me to.  I’m equally sure that’s totally okay.  The cherry-chocolate combo was quite tasty.  And I learned from the jam problems and went a head with a Big Ass Tip™ for piping the cream. 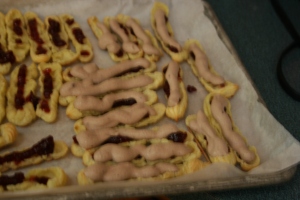 I think it says a lot both about me and my friends that when it came time for the final step and there were eighty-million things going on in my kitchen because people were arriving and we’d declared a heat emergency and decided to move the BBQ indoors, not only did I find somebody willing to donate their hands as auxillary counter space, but they didn’t bat an eye when I stopped to take one-handed pictures. 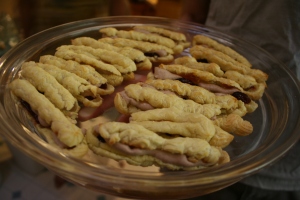 I’m not sure I’d made these again, just because there was such a process involved for something that doesn’t really keep well.  However, I will almost certainly pilfer the chocolate cream recipe for something else in the future, and making pâte à choux for the first time was a good experience.  Overall, it was nice to have a project that was new to me, and where the drama and adventure came from the circumstances around the cooking, not the craptastic recipe guidance.

Also, now I can tell people that once, I made eclairs, just cuz.  That’s a shortcut to cooking cred as good as any other I’ve got.